Round Rock, the AAA affiliate for the Texas Rangers, used three relievers in the game I saw them play live against Oklahoma City. In this post, I'll take a short look at each of them using both my live look and Pitch F/X data.

Joe Ortiz made the Rangers' club out of Spring Training and pitched reasonably well in a couple of stints with the team by not walking anyone, but failing to miss any bats as well. He should be back with the big league team once the AAA season ends and MLB rosters expand to 40. When looking at a GIF of his delivery, the first thing you notice is his odd size:

Ortiz is listed at 5-7 175, which I think is conservative when it comes to weight. He is one of the shortest pitchers in affiliated ball, but he has a pretty pudgy frame to go with it. Here are the pitches Ortiz threw in his AAA outing I saw live (click to enlarge):

As you would expect with such a small frame, he has a low release point:

The above graph shows that he is clearly a low ball pitcher, but I think a graph showing the locations of his individual pitches demonstrates it even better:

He throws his slider and changeup in pretty traditional locations, but is actually a glove side pitcher with his fastball. This helps him pitch successfully against both lefties and righties, as he can throw the sinker away to righties and the 4-seamer away to lefties. Overall he throws arm side and glove side about equally.

Cory Burns was traded to the Rangers in the off-season by the Padres for Wilfredo Boscan. Burns has very limited time in the big leagues with both clubs, but has been downright dominant in the PCL the last two years (FIPs under 2.00 both times). Burns has a weird turn in his delivery that he has to get rid of with runners on base. He still didn't hold runners on at all:

Besides the turn in his delivery, the most notable thing about Burns is his high volume of changeups, something that showed in the outing I saw of him: 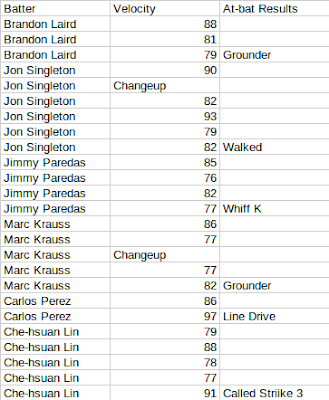 This makes him a reasonably heavy arm side pitcher on average:

Burns also has a weird slider that he can't get glove side, and he doesn't seem to throw a four seam fastball, instead opting for a 2-seamer that he can locate on both sides of the plate:

Ben Rowen makes the uniqueness of Burns seem trivial with his submarine delivery. Rowen has not pitched in the Majors, unlike the two above, but he has been dominant in AA and AAA:

I didn't get a great look because he only faced three hitters, and disposed of them quickly.

Rowen pitched for the Rangers' big league club in Spring Training for a few outings in Pitch F/X parks, so we do get a look at his release point and his average location of all his pitches in Spring Training (though instead of the traditional MLBAM, this data comes from Brooks Baseball's adjustment of Pitch F/X data). There aren't many pitchers that locate pitches higher on average than their release point:

Especially considering it was Spring Training and a small sample size, we should be cautious paying attention to pitch locations for Rowen. MLBAM thought Rowen's fastball was a changeup, so I changed it to a fastball. It was the only pitch he could get down in his Spring Training outings.