Yoshihisa Hirano is a 29 year old right-handed closer for the Orix Buffaloes. Once a reasonably effective but uninspiring starter (105 ERA - in 2006 and 104 ERA - in 2007, not park adjusted), Hirano has become one of the more effective relievers in the NPB, with a 2.53 kwERA over the last 4 years. In 2012, he walked just 5 batters in about 80 innings, while still striking out a batter per inning. I haven't heard rumors of him coming to United States, but the numbers are interesting, even if they don't quite match those of Kyuji Fujikawa's, who is 4 years older.

Hirano has okay size, listed at 6-1 185, and has an interesting delivery, mainly when he comes set with a pause that looks like this: 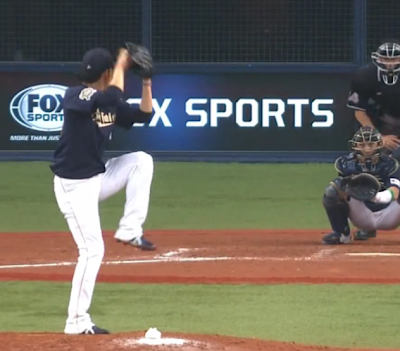 It isn't a long pause, but he brings his hands up high almost above his head.
The rest of his delivery is pretty standard other than his wrist, something he bends backward, like he is curling it or rolling it: 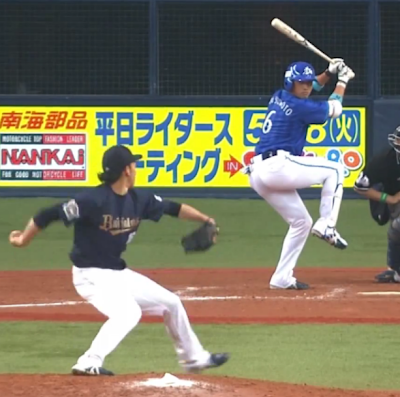 This seemed quite unusual to me, something I wasn't really used to seeing.

However, Masahiro Tanaka also has the wrist bend: 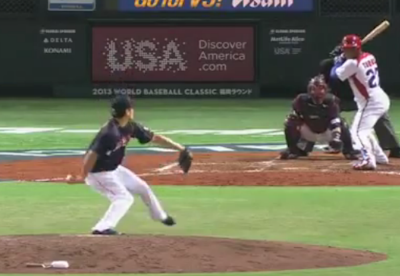 Tanaka and Hirano's deliveries are strikingly similar overall, though Tanaka has less of a pause. Hirano has a better body as well, looking leaner and more athletic. I looked at some other notable pitchers, and they didn't seem to have quite the same wrist bend as Tanaka and Hirano. 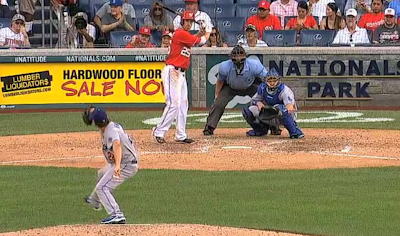 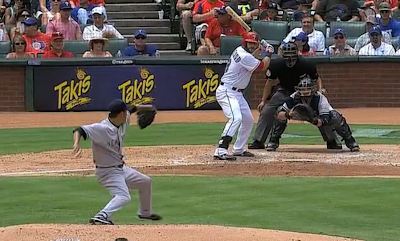 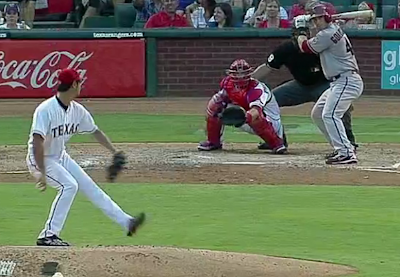 I don't pretend to know anything about the pitch by pitch mechanics of pitching, but from what I understand, usually pitchers cock their wrists on sliders. However, the Hirano screenshot above is not on a slider, and it seems that he does this wrist curl with every pitch. I don't know what it means exactly, but he has always had good control (or low walk rates), so it is not like he is struggling to command everything he is throwing like a slider, but it may give him (and Tanaka) more movement on his pitches.

I took the Yahoo data from Hirano's last two outings to get a better idea of what he throws, which turned out to be one good outing and one bad outing. 28 of the 36 pitches he threw turned out to be fastballs, averaging 92 MPH and getting up to 94 MPH. So it is a decent and a big league capable fastball, but isn't a plus MLB fastball. 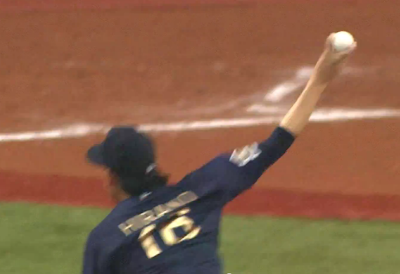 The pitch doesn't break as much as it just never seems to get there. Anecdotally, he buried it well (occasionally he would spike it), and would throw it to fellow righties.

It seems that he has only the 4-seam fastball and not a moving fastball, but it does have a little run and he located it glove side a lot, coming into lefties on occasion, but also getting a little arm side tail away from lefties.

In other video I've seen of Hirano, he has broken out a curveball at about 66-68 MPH, but the movement and location of it showed why it isn't a pitch he features.

Overall, I think Hirano has pitches that will at least work in the big leagues. He is a reliever because that is what the numbers show he is, but the previous ability to throw a lot of innings at a time has some value and can give MLB teams some flexibility if they are interested. If he comes to the States, it won't be as an elite back of the bullpen pitcher, but as a piece of a bullpen that can go long or pitch in short spurts. Since he is a guy that has become accustomed pitching at the end of the game and being elite, he may have no motivation to come to the United States (basically, it is usually unhelpful to predict what a play does want or doesn't want to do), and the Buffaloes will definitely want to keep him, but he does seem like a guy that is worth keeping an eye on. Guys that throw strikes and don't walk people with fastballs over 90 MPH and an off-speed pitch that they can throw to left-handed hitters have value on MLB teams.
Posted by Unknown at 5:28 PM