Yoshio Itoi, with Toritani and Abe as honorable mentions, appears to be the best position player in Japan that has a chance of coming to the Major Leagues for the 2014 season. Itoi has not yet reached international free agency, so he would need to be posted (of course, as this article was nearing completion, a report came out that said the Buffaloes do not plan on posting Itoi and he doesn't become an international free agent until 2017. We will see how that plays out, but for now, I'll focus on the player himself and not the theoretical availability of the player. Until that recent report, everything I had heard suggested that Itoi would be posted, and that was the reason the Fighters traded him away before the season started).

Itoi has always been attractive due to not only his good NPB numbers, but because of the evident plate discipline that comes with them:

In his age 32 season Itoi has maintained his overall hitting statistics and improved his walk and strikeout rates.  He has been batting 3rd most of the season, but was changed to lead-off temporarily by the Buffaloes, only to be switched back (and then switched back to lead-off on Tuesday and Wednesday). I don't think he has the power that MLB teams look for for the 3 hole (though he has a 128 SLG +, his ability to walk separates him more, with a 137 BB % +), making him more of a lead-off type hitter if not a guy who hits in the bottom half of the order in the Majors. Compared to other hitters in the NPB (specifically the Pacific League, where I am comparing statistics for this post), his ability to walk and hit for more power is more notable than his ability to hit for average (114 Batting Average +).

Let's break down his swing more slowly by looking at screenshots. These are from 2012, so he is wearing a Fighters jersey (even though he plays for the Orix Buffaloes now), but his swing is the same. 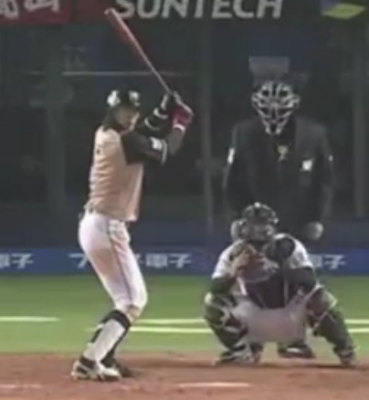 He turns his hip a little bit which causes his body to no longer be facing the ball directly, with his back turned slightly towards the pitcher. This seems to be  momentum related, like pulling back on a rubberband to make the force coming forward harder. 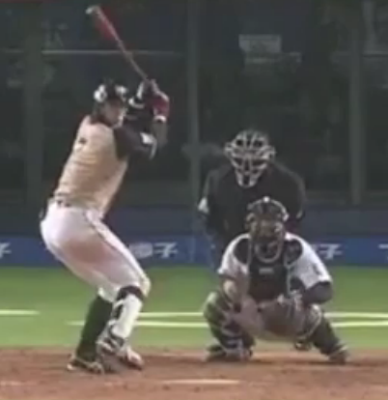 Here he doesn't seem to be on balance, and at this point it seems sort of amazing that he ever hits for power. If you didn't see the screenshot below it, you would perhaps think that he was about to be hit by a pitch and was moving out of the way. 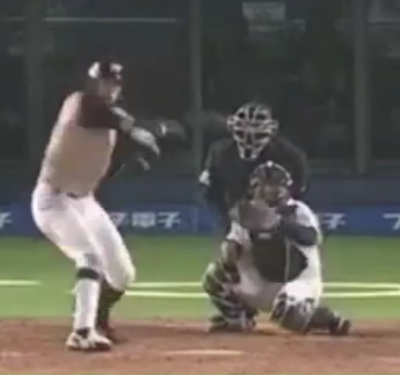 This is where he gets more "normal", with the bat head coming forward. There is a lack of "jailbreak" on the part of Itoi, meaning he isn't starting to run as he swings. He stays in there, he just looks a little strange feet wise, and he is clearly trying to pull this ball. 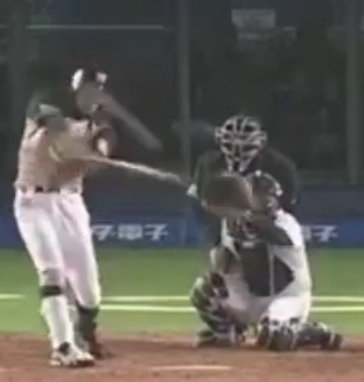 The head remains in a good spot, staying with the ball and not going a different way from his body. 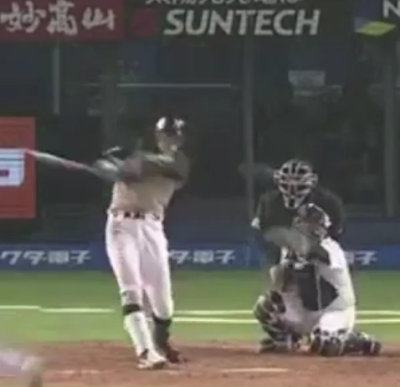 As he finishes his swing, this is when he starts to break out of the box, not leaving early, but instead letting his momentum carry him out of the box. 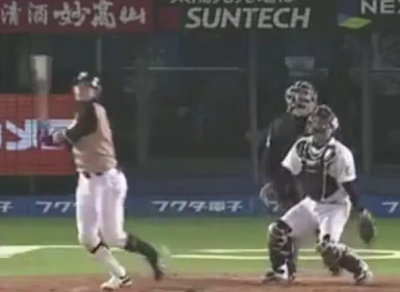 Here is another look at his follow through in a different at-bat: 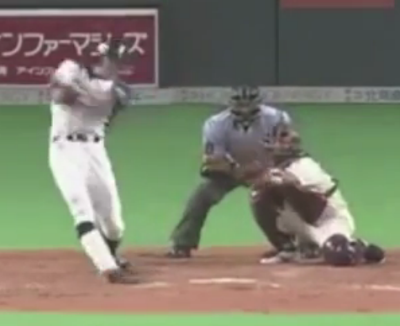 His balance is just odd, as his body seems to be leaning towards the catcher while his right leg is going in the opposite direction. My initial guess is that this would subtract from his power potential, but statistically he packs quite a punch for a guy that doesn't have a stout frame. He seems to succeed on inside pitches by moving away from them, using the balancing act to get his body away so he can extend his arms and avoid getting jammed. All the GIFs and screenshots above are of him pulling the ball, but the below screenshot shows Itoi hitting a homer to the opposite field

It is hard to see him doing anything different here, it just looks like he was perhaps a little late on the pitch. Without any spray charts, it looks like Itoi is a pretty pull heavy hitter and is always going to be attempting to pull the ball with authority. He evidently has the raw strength to hit a homer the other way and I have seen him flip balls the other way for hits (on both the inside and outside of the plate), but I think the preference is to pull and that is where most of his power comes from, which makes you wonder how he will handle balls on the outside of the plate.

I took a look at the last 430 pitches Itoi has seen at the plate in the NPB (the number is random because I started keeping track at a somewhat random time. It is a good sample size though). I tracked the Yahoo! pitch tag, velocity, opposing pitcher platoon, result of each pitch, and the general location of the pitch just for the ones he put in play.

In that time, Itoi put 66 pitches in play (in play includes homers for this post) that I have location data for, 77 overall (I just missed the other eleven for some reason). Compared to MLB league average (I don't have league average pitch breakdowns for NPB), this is about half a percent below average. However, this doesn't mean he has contact problems, as he whiffed at only about 6.5 % of the pitches he saw in the time period. He took called strikes 21.6 % of the time, and balls 41.6 % of the time. This is about 5 % more balls than league average, but also nearly 3 % more strikes taken than league average in the Majors (by taking the 28 % strikes looking out of strikes thrown and multiplying it by .64, which is the strike percentage in the Majors. Both of those numbers were taken from Baseball Reference). This means that Itoi seems to be a passive hitter overall. He also has a foul percentage of about five percent less than MLB average (12% to 17%), which probably hurts his pitches per plate appearance. He has less swing plays than most hitters, but unless he can get his foul total up, he won't be driving pitch counts up as much as you would expect. Considering his low whiff percentage, I don't think contact is a problem, and I could see the fouls going up in different sample sizes.

In 2013, one real concern has been his platoon splits. He has just a 97 BA + against lefties, with a 8 % difference in batting average (Yahoo! is the only place I know of that has NPB splits, with just splits for the current season, and they don't have OBP or SLG) between righties and lefties, bigger than the MLB average of 6 % in batting average for left-handed batters. 150 of the 430 pitches in this data set were against lefties and only 7.3 % of them were whiffs, meaning he wasn't having a problem making contact against them. He took a few more called strikes, but had about the same ball percentage. Itoi had 6 groundouts versus 6 flyouts against lefties, versus a crazy 22 to 8 ratio against righties. However, all 4 home runs came against righties in the 430 pitch sample size, as well as all 3 line drives (which can be a somewhat subjective tag).

Out of the three home runs I have location data for, one was low, but in the middle part of the plate, another was high and away, and one was up and in the middle of the plate. Three of them were fastballs, and the other one was classified as a forkball. The most common location for Itoi to make contact on was middle away, meaning pitches that were on the other side of the middle of the plate, but about middle height. The least common was up and in, with just two pitches hit, both fastballs for base hits. It was probably least common because pitchers generally want to avoid that location, noting what we saw in his mechanics, he hits the inside ball very well. This also seems suggest that any concerns about him being able to reach the ball away with his swing are unwarranted.

Only 39 of the 430 pitches he saw were 146 KMH (roughly 91 MPH) or above, meaning that he hasn't seen a lot of good velocity lately, something he will see if he plays in the Majors. MLB teams will have to make sure he is able to handle that kind of velocity, because his success simply won't translate to the Majors if he cannot. He has seen four 95 MPH fastballs, and he has hits on two of them, one that was in the middle of the plate (and low), and one that was away. He also whiffed and took a ball on 95 MPH fastballs. That whiff is the only whiff of the 39 pitches (he did have a check swing strike, which I think is technically considered a whiff), so it appears you can't blow good fastballs by him.

Of course, the most common pitch Itoi saw was the 4-seam fastball, seeing it 50.2 % of the time. Here is the breakdown of the rest of the pitches he saw:

Because of the right-field profile despite good speed, Norichika Aoki seems to be a somewhat logical NPB to MLB comparison for Itoi, especially since they are about 6 months apart in age. Just off hand, Itoi seems to be a slightly slower version of Aoki that hits for more power (not to mention more sensible and orthodox hitting mechanics than Aoki). Here are Aoki's last two seasons in the NPB, adjusted by league average:

Aoki definitely hits for a better average (or did in the NPB at least), but Itoi also brings better power. Overall, they seem to be similar hitters in effectiveness, but go by it in slightly different manners. The assumption that Aoki is faster is also disputable as well. In Itoi's age 29 season (2011), he had 31 steals and was caught 6 times. In Aoki's age 29 season (also 2011), he had just 8 steals in the NPB, and last had 30 or more in 2008 (of course, he did it in the Majors in 2012 as a 30 year old). Itoi's overall statistical profile seems to be a better one than Aoki's since he seems to have more speed and power, something most MLB teams would probably take over the ability to hit for average.

Even with the move to right-field (which has a 10 run difference in value from center-field according to traditional positional adjustments, but just a 5 wRC + difference in 2013 so far, or about a .022 difference in SLG), the ability to do more than hit makes Itoi a somewhat safe player as long as (potential) posting money doesn't get too high. At the very least, his ability to play defense and run the bases makes him a useful backup outfielder. Perhaps in the same vein, I think his hitting skills are diverse enough (he hits for average, power, and walks as well) that we can expect at least some of it to translate well in the Majors. He most likely isn't going to get himself out by swinging at bad pitches, can hit the ball out of the ballpark, and doesn't seem to have obvious holes in his swing. His ability to hit left-handers is a concern, but he could still be an every day player if the rest of the skills translate. I think he can be a good MLB player, a slightly above league average regular that probably isn't going to be extremely exciting, but he should hit at a level that would justify a much bigger posting fee than the ones that have been paid out for NPB hitters in recent years.
Posted by Unknown at 6:52 AM