Na Sung-Bum, a centerfielder for the NC Dinos, is one of the better rookie of the year candidates in the Korea Baseball Organization. About to turn 24, he was drafted by the Dinos 10th overall in the 2012 draft and brought up to the KBO team in May. The left-handed thrower and batter has basically been a league average hitter by hitting for more power than average/on base skills (95 OBP +, 107 SLG + according to non park adjusted league averages). His 7.9 walk rate isn't bad, but the strikeout rate is higher than you would want. Still, he has a .304 BABIP, which is lower than the league average of .320, meaning that the OBP could come up, especially since he is a good runner. Na is 11 for 12 in stolen bases with three triples so far this season.

13.2 % of Na's hits are home runs, nearly twice as high as the KBO league average of 7.4 % (MLB Average is 11.1 % this season, Carlos Gomez is a decent comparable in this regard, not to mention he also plays centerfield, with a 13.3 % ratio. Gomez is a much better runner than Na, not to mention Gomez is clearly playing at a higher level than the KBO). So he seems to be somewhat of an all or nothing hitter, especially since he only has 14 doubles. Here is a GIF of what I believe is his most recent homer:

The pitch is basically in the middle of the plate, and Na uses a pretty awkward looking uppercut to get to the ball. He is looking to pull the ball, and obviously he did effectively, with a hard lined shot over the fence.

Here is a screenshot view of his first career KBO homer: 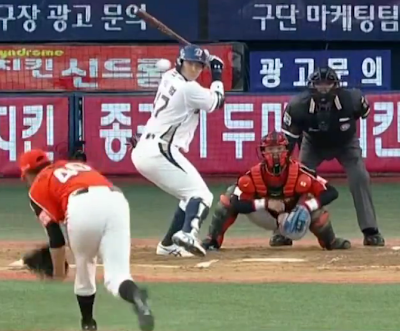 His set up as the pitch is coming to him is pretty standard, with a slight crouch and lean that reminds me of Joey Votto (that is all that Na reminds of Joey Votto) 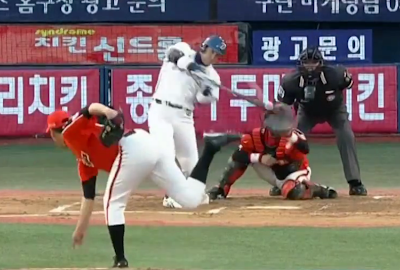 At the point of contact, you see the same thing that we saw in the recent homer GIF. He dips his left shoulder down and drops his bat plane. This is a swing of a low ball hitter that is going to hit more fly-balls than ground-balls. Listed at about 6 feet tall and 211 pounds, Na has the frame to do this, and as the numbers show, he can pack a punch. 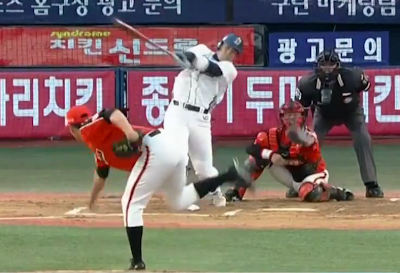 This part of the swing, the follow through, seems the most awkward. He seems to pull off the ball a little, and the top of his body is at a different angle than his legs. They seem to be going to opposite directions. Since I brought up Joey Votto earlier, it might be helpful to look at a couple screenshots of the best left-handed hitter in baseball statistically over the past several seasons. 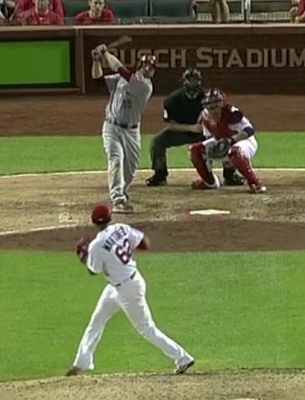 Votto pulls the ball to right-center field in this at-bat. Notice how his body stays more upright in his follow through, despite a somewhat uppercut swing path. Of course, Votto goes the other way more than he pulls the ball (at least when he hits for power), as this heat map from MLBfarm shows: 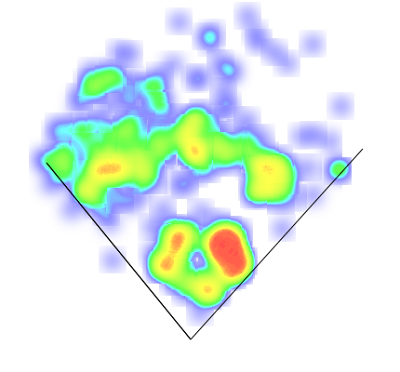 The following screenshot shows Votto hitting a homer the other way: 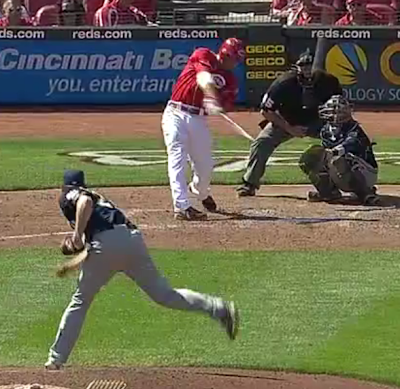 Notice that he does lean in on a pitch low and away, which you have to do to hit a pitch low away, but he doesn't go the other way with his legs. Unlike Na, who seems to twist his body, having his legs go the opposite of his body, Votto is on a solid front foot, which helps him keep his power going that way.

Of course, to compare Na to Votto is not fair to Na, but I think it serves the purpose to show what a great pure hitter does with his hitting mechanics and compare it with what Na is doing. The above screenshots of Na were partially blocked by the opposing pitcher, so here is an angle of Na that avoids the pitcher. This is about as high as his leg kick gets, as he avoids the large leg kick, opting for a more traditional small leg kick as a timing mechanism. 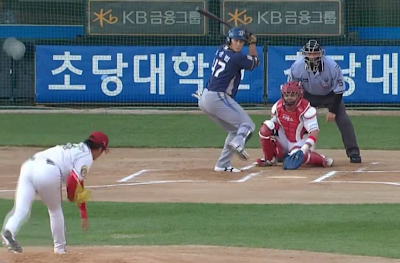 I do like how Na keeps his head in his swing, not causing even more body parts to be misaligned. 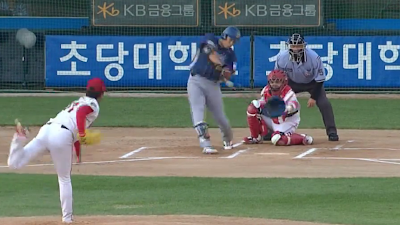 His size seems to help him make large strides and run what appears to be very smoothly and in control. The swing there was obviously an over swing, getting too long on an inside pitch, making it impossible for him to pull it with authority.

Even though he is mainly a pull hitter, he can go the other way as well

He can have great bat control at times, this is a really good piece of hitting. He doesn't have the power the other way, but he can poke an outside pitch the other way, which should help his average and prevent him from getting shifted on too heavily. I certainly don't want to paint the picture that he can't hit because he has some of what looks like mechanical flaws. He can hit. He has good bat speed and control, so I think his average and OBP should come up in the future.

Defensively, here is a look at his arm strength. He is a converted pitcher that could evidently throw up to 93 MPH and had some success in international play.

There have been some drops on more than one occasion, as he has shown his inexperience:

I think Na has a unique set of skills that make him a very interesting player. The traditional tools are all there, he can run, he can throw, and he can hit the ball with authority. So for that reason, he is interesting. However, it isn't like he is extremely young. He is going to be 24 next year with only a couple of seasons as a full time position player and less than a year of KBO experience. For that reason, I think their should be some serious brake tapping before calling him the next KBO superstar. He has to make significant strides both defensively and with the bat before I would be comfortable with that assertion. I think he is a nice player with quite a bit of talent, but he just isn't as advanced as he needs to be at this age to be someone who is on serious international radars or considered the KBO's next elite position player.


Thanks as always to Danny K for the help in gathering information and video for the post. All GIFs and screenshots came from videos from SPOTV's YouTube channel.
Posted by Unknown at 10:37 AM