Hisashi Takeda is the latest NPB player to earn the international free agent option, meaning that he has the opportunity to sign with a MLB team if he chooses to do so (and assuming a team wants to sign him. He is in the middle of a two year deal, but from my understanding, he can get out of it by signing with an international team. I believe he is making about 2.5 million dollars this season. He says that he has no interest in living overseas, but this has been said before). Takeda is a right-handed reliever (no career starts in the NPB) that has served as the Nippon Ham Fighters closer since 2009. The 34 year old has been really good since taking over the job as well, giving up just 2.34 runs per 9 innings.

The problem is that much of Takeda's success seems to be batted ball related, as he has a 4.44 kwERA over that time with a 14.7 % strikeout rate. He has given up homers to just 1 percent of the batters he has faced, and walked just 6.6 % of hitters, meaning that while he doesn't strike anyone out, he doesn't give up homers or walk people either. This means that he gives up a lot of batted balls, and it appears that he is getting an unusual number of them turned into outs. This year he has a 59 ERA -, but is striking out less than 13 percent of batters faced, over four percent worse than league average (not adjusted for starters or relievers). So while it is hard to argue with his run prevention abilities, it is difficult to tell how much of it is him just taking advantage of the often run starved NPB environment. The first and most natural reaction seems to be to write off Takeda as a MLB prospect because he is not missing bats at a lower level so it is unlikely that he will miss bats at a higher level. However, I'll dig a little bit deeper than that.

From a scouting perspective, the first thing that stands out about Takeda is his height and size in general. He is listed at 5-7 and 161 pounds, laughably small for any professional athlete, especially for a successful pitcher.

Takeda compounds the lack of height with a really low release point thanks to the way he spreads out, as this photo from the Fighters' official site shows: 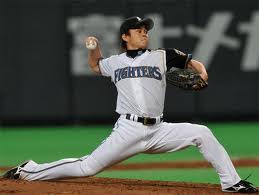 It is almost as if he takes advantage of his height by getting even lower. The photo also shows his somewhat bizarre arm action as he comes forward, a somewhat jerky motion that eventually comes over the top. Here is what it looks like from behind.I don't know who to compare it to because I am pretty sure that it is unique. 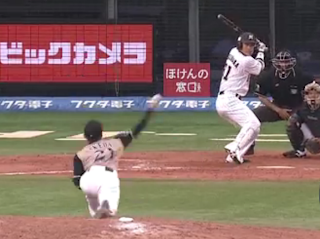 His arm angle is really standard, but it is still a low release point because of his height and the fact that he gets so low. In this case, the low release point may help him, as it isn't an angle hitters are used to seeing, and he is not in danger of leaving the ball up, because even though he doesn't get on top of the ball in a traditional manner, the ball would actually have to go up to be high in the zone. I think this helps explain his miniscule home run rate. Evidently, his arm angle is not easy for lefties to see because he has reverse splits when it comes to both batting average and strikeouts to walks.

The following are GIFs of the rest of his pitches:

The whiff on the fork is especially amusing, and it appears to be his best pitch. I do like his curve because it isn't too loopy and slow, though I think the slider is too soft and doesn't differentiate between the curve as much as you would like. For his fastball velocity, he seems to use it well, going arm side with the 2seam, and glove side with the 4seamer. Even at the NPB level, his fastball is more successful than the velocity would let on.

Because of the lack of fastball velocity and strikeouts, I don't think Takeda is a real MLB prospect, and I think his game wouldn't translate very well, though funnier things have happened, and it is really hard to quantify how the unique delivery and deception would play in a different league.
Posted by Unknown at 8:08 AM