Chang-Yong Lim made his MLB debut with the Cubs on Saturday after rehabbing in the minor leagues all season following a career in Japan and Korea. He walked a batter, gave up a single, and got a grounder into a double play.

Lim is most notable because of his sidearm release point: 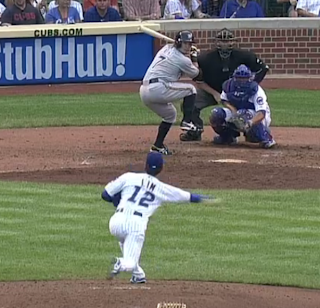 Lim gets a little buried, but he is most similar to Cla Meredith and Darren O'Day, a little lower than Steve Cishek. Here are the locations for all of Lim's pitches in his debut:

It seems that he was working mainly arm side and low, rather than sweeping the ball away like you would expect sidearmers to do. Take for instance, Darren O'Day as a comparison. He throws low and glove side quite a bit according to the pitch breakdown by Baseball Savant: 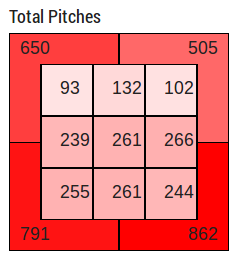 In the WBC, Lim relied on a 95 MPH fastball, a sinker, slider, and splitter. The following speed and spin chart shows the stuff Lim threw in his debut outing for the Cubs:

He clearly doesn't have the same stuff he did four years ago (though who does?), but he can still get it up to 94 MPH. Lim threw no breaking balls, but the chart suggests three different pitches. The slow one is some kind of changeup (with basically the same movement as the fastball) and it seems that he has two different fastballs. There isn't a real difference in horizontal movement (the difference is in vertical movement), but I am calling the faster group FF (4-seam) and the slower group FT (2-seam). These actually match the MLBAM tags. While there was no vertical difference in how he located the two fastballs (he kept both low), he kept the 2-seam arm side while throwing the 4-seam glove side, pretty traditional (other than the 4-seam is extremely glove side).

Ironically, the single he allowed, to left-hander Norichika Aoki, was actually out of the strike zone on the arm side, meaning it was quite a reach job by Aoki