What offensive statistics are most important?

I wanted to see what base statistic most correlates to runs scored. This way we know which statistics to value when looking at offensive players. I used Fangraphs customizable reports, and looked at all 30 teams from 2000-2011. I selected a few different statistics to see the correlations. 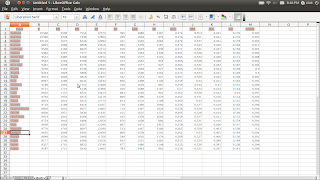 The Yankees have scored the most runs during this time period, and also have the most home runs and walks. They are 27th in Sacrifice hits and have less strikeouts than average. They have also grounded into the 2nd most double plays and are 5th in stolen bases. They are second in batting average and first in OBP. They are tied for first in slugging and tied for second in ISO. As far as BABIP goes, they are tied for 5th. The worst team in this era is the Expos/Nationals, scoring 8177 runs or 77.4% of the runs the Yankees scored (according to Sabermetric formula of 10 runs equaling a win, this is 238.3 more losses than the Yankees or almost 20 more losses a season). The Expos/Nationals were in the bottom half in baseball in homers and walks. They were 12th in baseball in strikeouts and had the second most sacrifice hits. They grounded into the 13th most double plays, and were about mid-pack in stolen bases. They were second to last in both batting average and OBP. They were 5th to last in ISO and 3rd to last in SLG with the 7th worst BABIP.

So it seems that offensive statistics can be ranked by importance in this order: Great correlation: OBP, BA, SLG, ISO, BB, HR,
Small correlation: SH, BABIP
No correlation: SB, GIDP, SO
Posted by Unknown at 9:23 PM