How much does QB success depend on the team?: Part 1

Unlike baseball, success for a player in football depends a lot on the success of the players around the player. For example, Justin Verlander's strikeout totals have nothing to do with how his teammate Brad Penny pitched. Ichiro Suzuki's terrible 2011 defense had nothing to do with the Mariner's anemic offense or problems on the infield. I wanted to see if I could measure how much a quarterback's success had to do with him or the team he was on. To do this, you have to some how isolate the quarterback from the team. The best way to do this, that I can think of, is to use quarterbacks who switched teams during their careers. So I included the last year's passer rating with the previous team, and then either the first year with the new team or his total numbers with the first team. I used 200 Attempts as a rough requirement (I did make some exceptions). I only wanted to use consecutive years so people like Vick and Grossman are thrown out. I did this because a lot can change in two years for a player (same reason I didn't do baseball write-ups on people like Jamie Moyer and Manny Ramirez for the 2012 season).I including Russell Wilson in the spreadsheet because I found the difference between his 2010 season with NC State (where he was a solid quarterback) and his 2011 season with Wisconsin (where he was one of the best in the nation). I then included some notable running backs that have played with multiple teams and compared their average yards per carry. 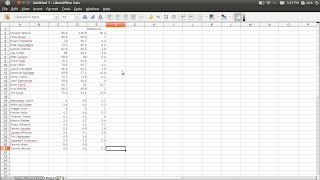 Runningbacks had an average difference of .65 yards per carry. This is a huge difference. So, at least it would seem according to these samples, that things like offensive line affect a running back much more than a quarterback. In Part 2, I will use college statistics for quarterback and try to see which statistics best translate from NCAA division 1 to the NFL.
Posted by Unknown at 3:48 PM