Jose Alvarez was called up by the Detroit Tigers to make a spot start on Sunday and was very successful over 6 innings. He was sent back down after the game, but the success in his debut could be called surprising since he was signed as a MiLB free agent in the off-season. Alvarez, a 24 year old left-handed pitcher, was originally signed out of Venezuela by the Red Sox in 2005 and topped out at A+ in the organization. He was traded in 2009 to the Marlins for Jeremy Hermida where he would top out at AA before becoming a free agent after 2012. He was very mediocre in AA in 2012, striking out just 12.5 % of batters.

The Tigers assigned him to AAA to start the year, and he was a completely different pitcher over 12 starts, striking out 25.8% of batters in a higher level, with a 2.92 kwERA. This is what earned him his spot start. 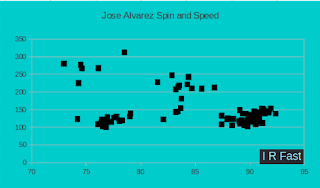 So really about an average fastball, maybe slightly less, averaging just shy of 90 MPH if you include all fastballs from the 55 feet mark. It also looks like he threw a lot of sliders, a beavy of slow changeups, and a handful of curveballs at a similar velocity. The MLBAM tags just called them all sliders, even though there is a difference in some of them both by spin and by vertical movement.

Jeff Francis and Chris Capuano are the closest comparisons when it comes to release points, both soft-tossing far out lefties with huge platoon splits. In the minors Alvarez really hasn't had platoon splits, basically equally good against lefties and righties. Considering the stuff and amount of changeups, those two might not be bad comparisons for Alvarez. Here is what his release point in graph form looks like, along with the average locations of each of his pitches (MLBAM tags):

The average pitch is in a spot that is routine, but the fastball is a little more arm side than you would expect. The changeup doesn't quite get all the way down, while his slider is an extreme glove side pitch.

He used the slider against both righties and lefties, while he only used one changeup against a left-handed hitter. This usage makes some sense since his changeup is so slow. Out of the 191 left-handed starters that have thrown a changeup in the Pitch F/X era, Alvarez' change is the 177th fastest. There doesn't seem to be much of a correlation between velocity and success of a changeup (the top 15 whiff changeups from lefties that have thrown at least 500 of them is only about .1 MPH harder than the 15 worst whiff changeups) so I am not real sure what to make of it. Watching the pitch in video, it clearly fooled some hitters, but it doesn't have much real movement. It has a little bit of noticeable downward movement, but for the most part, he seems to be relying on speed differential. My suspicion is that hitters will adjust to this, just because it isn't devastating. When you watch other slow changeups that have been successful, like say Dallas Braden's, they move quite well, both horizontally and vertically. Of course, Braden's Pitch F/X movements are nothing special, but they were better than Alvarez's, whose movement numbers are very pedestrian.

Thus, I am skeptical that Alvarez can get righties out at the big league level, even at a Francis and Capuano level. Those two pitchers success seem to be driven at least in part by their changeups. At best, Alvarez is a back of the rotation starter, but more likely, some kind of swing-man.
Posted by Unknown at 1:01 PM