Alfredo Figaro has thrown 34.1 innings for the Brewers so far in 2012, and has already given up 8 homers. 7 of them have come on pitches classified as fastballs. According to MLBAM tags, his fastball is averaging 94.9 MPH, in the top 40 in all of the Majors. The average velocity on the 4-seam fastballs he has given up homers on is 94.79 MPH, with 92.4 MPH being the slowest and 96.1 MPH being the hardest. So there isn't a significant velocity difference, he is giving up home runs on good fastballs.

Around Christmas, when it first appeared that the Brewers would sign Figaro out of Japan (though there was some drama that delayed the signing), I wrote that his fastball was good, but that he simply tried to overpower hitters with it and I wasn't sure that would work in the Majors. However, his fastball so far this year is better than his fastball was in his first MLB stint and even in Japan, so while the approach explanation seems plausible, we have to adjust for the better fastball velocity. Still, looking at location is probably a good start.

Here are his strike zone locations on his homers, with the name and side of the plate of the hitters that hit the ball (remember Figaro is a right-handed pitcher).

Here are his average locations (there is an all pitches bubble right behind the fastball, as he locates his change and slider the same as his fastball on average)

For reference, his whiffs with the fastball are higher than the average fastball, the same horizontally, but lower than the homers. This seems to be classic pitching up in the zone hurting him.

It is important to note that all his home runs allowed have come at home. Miller Park is a hitter friendly park, especially for home runs, but he has also thrown over 2/3rds of his innings at home.

According to Katron.org, here are the homers he has allowed against right-handers: 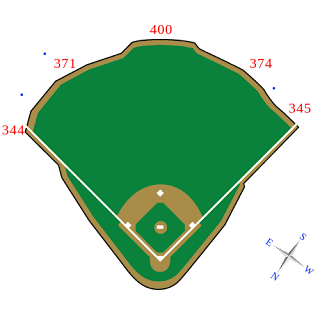 2 of them were pulled, with one hit the other way. 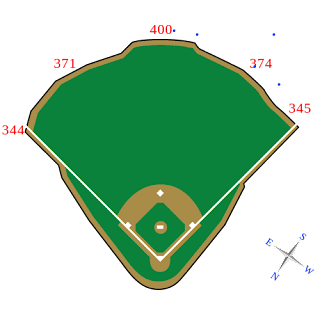 All of these were pulled, which seems to mean that hitters must be expecting it. As far as count goes, none were with 3 balls, but none were with 2 strikes. So it is not as if he is getting into unfavorable counts and having to just throw a fastball over and have it hit out of the park, but when he gets to two strikes he isn't giving up homers. When you look at release points, the average homer is slightly more out than the average fastball, but also slightly taller as well. Considering the difference is really less than .05 feet, I don't think it means anything, especially since we aren't controlling for Pitch F/X park factors. Figaro has a low average release point, but it isn't "out" very much, so it is doubtful that he is just really easy to see, but he has a well below average swinging strike percentage this year. As this screenshot shows, he goes straight over the top, standing on the 3rd base side of the rubber: 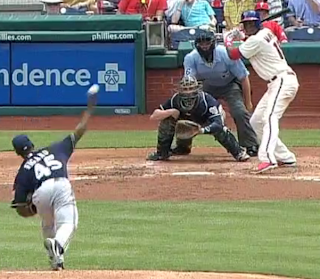 His head and left shoulder are tilted pretty hard to the left, but the problem doesn't seem to be control or delivery repetition, it is home runs allowed.

So the problem seems to be fastballs that Figaro leaves up that have less vertical movement (and perhaps releases a little higher), or perhaps have less vertical movement because he leaves it up. However, this can be too easy of a narrative, so I wanted to look at the zone a little more, so I looked at all the pitches Figaro has thrown 2.5 feet (the middle of the plate) to 3.5 feet (the top of the strike zone) high, along with pitches that are within a half foot horizontally in the strike zone. It is all the pitches that would fit in the blue box in this graph of a blank strike zone:

We are looking at this box because 5 of Figaro's home runs have come in this box (actually a much smaller box than this, as only two of them got over 3 feet high and just barely and none were more than .4 feet away from the middle of the plate). From my count, he has thrown 83 pitches in this zone (not counting Sunday's outing). Only 5 of them have been whiffs, 6 of them being run scoring plays (the 5 homers and I believe an RBI single), 20 have been put in play for outs, and 6 of them for hits/no outs. 24 were fouls, 19 were called strikes, and two of them were wrongly called balls. This is an extremely high contact rate. For whatever reason, and sample size is an option here, he is really struggling to pitch up in the zone despite a good fastball.

I thought one reason may be because there were so many pitches in the middle of the plate, rather than on the "edge" of the plate. According to Bill Petti of FanGraphs, Figaro's edge percentage is 17.5 with a 31.2 heart of the plate percentage. The edge percentage is close to where Hiroki Kuroda and Travis Wood were last year, with Kuroda having a lower heart percentage and Wood having a higher percentage. Going by last year, it is a lower than average heart percentage, similar to some really mixed company in 2012 in Clay Buchholtz, Felix Doubrant, Ross Ohlendorf, and Dan Wheeler. Figaro works in the strike zone over 2.5 percent more than league average, and works arm side more (compared to the average right-handed pitcher in the Majors) than glove side, with down the middle being more frequent than glove side.

His change stays arm side, but also stays up. These are not ideal locations for off-speed and breaking pitches. This would explain his struggles if we didn't know that 7 of the 8 homers have come off the fastball (the other was his change, which isn't used often). So it is not as if hitters are just hitting his off-speed pitches, they are hitting his fastball. However, one possible explanation is that since hitters know his secondary pitches are poor, they can sit on his fastball, which would help explain why nearly all his homers' allowed are pull homers.

The lack of secondaries, along with his failure to have success in the high part of the zone, seems to be why Figaro is giving up so many homers with a plus fastball. The lack of a good changeup is clearly a problem against lefties, and makes it unlikely (without some improvement in the pitch) that he will really have any success in the Majors except in some kind of platoon speciality role that the Brewers are not currently using him in.
Posted by Unknown at 12:00 PM