Jang or Knight? My take on the Golden Glove Controversy

In the KBO, Jang Won-Sam was awarded a "Golden Glove" over Brandon Knight.
Golden Gloves have nothing to do with defense in the KBO, it is more like the NPB's "best nine" or like an All-Pro team. This caused some controversy on the English speaking versions of the internet, with accusations of anything between an over reliance on pitcher wins to borderline racism. I find it hard to care about awards and the hall of fame when it comes to the Majors. I have mostly stayed out of that realm of baseball writing because I find prospects and play evaluations more interesting. However, Dan (of mykbo.net) somewhat suggested this idea and it sounded fun.

Knight regresses to the mean in a hurry when DIPs is introduced, and FIP insists that Jang Won-sam is a better pitcher, but Knight just threw more innings (thus the higher WAR). So which is more valuable? While I usually prefer WAA when comparing everyday players or pitchers (the replacement level to me seems to me to be best when comparing marginal players such as utility players or bullpen pitchers, though leverage problems develop in the latter), there is something to be said for throwing more innings, especially when it is nearly 50 innings of difference. To use a perhaps flawed American example, Joe Blanton and Brandon McCarthy received basically the same contract this off-season. Even with home/road splits concerns, McCarthy is clearly the better pitcher. Blanton is a below average starter while McCarthy is an above average starter. However, Blanton has been healthy basically his whole career, while McCarthy has had major injury issues, especially with his shoulder. While free agent contract money does not necessarily equal true worth (sometimes teams are just wrong), it does give us a window into the two front offices and how the pitchers are basically viewed as the same. The Angels took a safer bet with Blanton while the Diamondbacks took the riskier player with the higher ceiling in McCarthy. So even though FIP says Jang Won-sam is a better pitcher than Knight, Knight's durability perhaps makes him more valuable.

One could argue that we shouldn't use things like FIP and BABIP when looking at leagues like the NPB and KBO (along with independent leagues, college baseball, and lower minor league levels) because the diverse pools of talent do not exactly create a controlled environment (or at least not as much as we are able to break down environments in the MLB). I somewhat disagree with this, as I think that dominance would show up at least as much in K/BB/HR as it would in BABIP. In other words, when I see a low BABIP in other levels, I am most likely to only conclude that it is just dominance or some kind of BABIP control if the pitcher also has dominant K/BB/HR (that is, if a pitcher keeps putting up 1.50 ERAs while his FIPs come out to be in the 2.00s, one could easily say that he is closer to the 1.50 ERA in true talent in that league). The other exception (and there are many in DIPs) would be if a pitcher had shown a track record of low BABIPs. Knight only got 31.1 innings in the Majors, but his BABIP was a high .353. In his last shot in AAA (89 innings), his BABIP was .347. So it is certainly not a skill set he had shown before going to Korea. Even in the KBO, he hasn't shown this before 2012, as his ERAs were well over 4 in both 2010 and 2011. Knight's ground-ball rate (at least GO/FO, which does lend itself to some variance as perhaps a pitcher has more ground-balls turned into outs than another one for a reason he doesn't controlled) is much better than Jang's, but it is hard to get over the fact that he struck out less than a batter every two innings and has less than 2 strikeouts per walk. One could argue that you shouldn't base awards off of advanced metrics like FIP, but since this article is more interested in which pitcher is/was better, it doesn't matter for our purposes.

I am doubting the KBO used any kind of advanced metrics when awarding the gold gloves, so we will look at the two pitchers from a scouting perspective.

The first thing I look at when scouting pitchers is obviously fastball velocity. According to KBO Data's scouting reports, Knight's fastball averages between 86.18 MPH to 93.62 MPH. Jang's is a little slower, sitting between 84.94 MPH to 90.52 MPH. Of course, Knight is right-handed, while Jang is left-handed. You usually expect slightly lower velocity from left-handers, but the 3 MPH difference is pretty big. Jang has the slower curve and goes to his changeup more often. Surprisingly, Jang's slider is a little harder than Knight's. Here is some video of Jang pitching against Ryu Hyun-Jin a couple of years ago.

To me, it looks like he does a pretty good job of cutting his fastball and showing good command of his slider. On the other hand, Knight (video below) seems to have some very good movement on all of his pitches:

For a ground-ball guy, Knight doesn't seem to keep the ball especially low, at least according to his heat map: 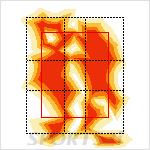 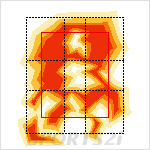 I think you can make a legitimate argument that Jang is the better pitcher and perhaps even had a better year. Especially if you just look at strikeouts and walks. Jang had more strikeouts and less walks than Knight did, which is simply, but perhaps predictive.
Posted by Unknown at 6:03 PM