A: Of course his HR/FB % dropped, but by how much we don't really know because of a lack of GB/FB data. I have always prefered FIP to xFIP because I do believe that preventing the amount of fly-balls that turn into homers is some kind of skill (rather than believing that almost all pitchers will give up a HR in a neutral setting for every 10 fly-balls). To see if I could demonstrate this (or prove the opposite or just muddy the water completely), I looked at the 10 qualified relievers with the best HR/9IP (we don't have HR/FB % for Yamaguchi so no need to use it here) in the Major Leagues in 2012. I then looked at how they performed in that one category in 2011, which should also get us an opportunity to make an educated judgment on explanation B. The 10 pitchers gave up 20 homers in 392.1 innings, or .46 HR/9IP. That would have been in the top 30 out of 134 qualified relievers in 2011, so there seems to be some correlation at least in that example. When you look at the NPB, the Central League in particular, the best 5 pitchers in HR/9IP in 2011 threw 137.2 innings in 2012 and gave up just 4 homers. So, I think there is good reason to dismiss explanations A and B, but is there enough evidence to believe in explanation C?

He is just 25, it is perfectly legitimate to believe he is getting better as a pitcher.
Let's look at his pitch data: 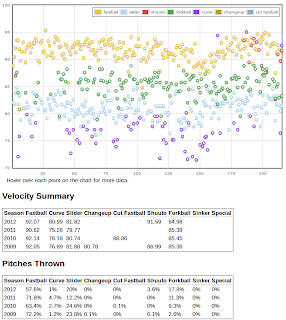 As you can tell, Yamaguchi has a legitimate back of the bullpen fastball, getting up to 95 and sitting at 92 MPH. You can see that his velocity is better in 2012 and 2010 than it was in 2011. This could be why he didn't see an improvement in basic performance despite the ball change from 2010-2011. He had a temporary velocity dip despite throwing his fastball more. In 2012, he ditched the curve and went with more sliders and forkballs.
We can compare Yamaguchi to Kyuji Fujikawa, who just signed with the Cubs.
First off, Yamaguchi throws harder, and is younger. However, statistically, they don't compare very well as Fujikawa has much better numbers, especially when it comes to K/BB. Yamaguchi is pretty similar when it comes to HR/9IP and he does play in a more hitter friendly park. I am not a big fan of Fujikawa when it came to scouting him.

Yamguchi's pitches, especially his slider, have some pretty unique movement. One of my complaints about Fujikawa was that his fastball was somewhat straight and mediocre in velocity. There are no such concerns with Yamguchi. His forkball basically falls off a table and should be an extremely effective pitch against left-handed hitters.

He has good size, less of a concern for a reliever, and has a pretty repeatable delivery. I like Yamaguchi a lot, and if he comes over to the MLB, I think he would have a lot of success in a late inning bullpen role. If Fujikawa was worth 2 years 9.5 million (roughly the same as a recovering Joaquin Soria), then Yamguchi is worth more (at least a 3rd year, maybe a 4th, I don't necessarily mind giving relievers long term deals, as long as they are good and young).
Posted by Unknown at 10:15 PM