T.J. McFarland was a Rule 5 pick by the Baltimore Orioles from the Cleveland Indians in the off-season. The left-hander stuck with the club as a reliever through spring training and has made two appearances so far in the regular season. I didn't know much about him when he was in AAA last year, and didn't see him in Spring Training, so I wanted to get a look at his Pitch F/X data (we are only looking at his MLB outings, and not the Arizona Fall League outing from 2011) and see if he is a guy worth carrying on the roster all season.

First, it is always helpful to look at where the pitcher is releasing the ball. It seems like a good start anyway. Here is McFarland's release point in graph form: 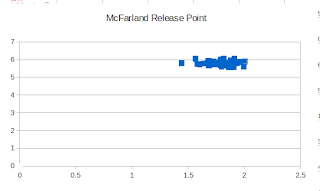 Because he doesn't come out very much but is still releasing the ball lower than average, McFarland is sort of unique when it comes to release point. The closest comparison may be a slightly more in and more upright Casey Fossum. While it is not always predictive of control, but he has repeated his delivery and arm slot pretty well with a .104 horizontal standard deviation and a .11 vertical standard deviation.

As far as the fastball goes, there really isn't much of one for McFarland. He has maxed out just over 89 MPH. The MLBAM tags also confused his changeup and fastball some and had some real weird classifications overall. I count 4 different pitches when looking at his spin and speed graph (with some labels that will prove to be a little hasty): 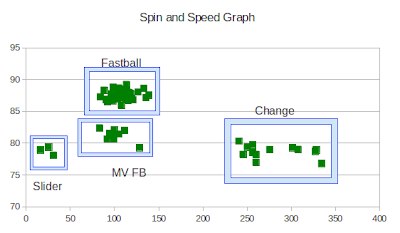 His average 4-seam fastball (the 42 pitches above 85 MPH) is 87.57 MPH. I think here we see the reason he was left unprotected by the Cleveland Indians. He is averaging less than 88 MPH out of the bullpen. This would rank 180th out of 189 left-handed bullpen pitchers in the Pitch F/X era. This is where the Casey Fossum comparison makes sense again, as he averaged 87.2 MPH on his fastball according to the traditional MLBAM tags and distance (and he averaged 86.1 MPH in Japan in 2010).

The pitches I am calling the moving fastballs in the graph average 81.1 MPH. Obviously this is significantly slower than his 4-seam fastball. Based on vertical movement (1.73 inches on average), it doesn't move much for either a cutter or sinker, or really any pitch. On the other hand, the horizontal movement is really dramatic. The Orioles park does not appear to be one of the parks that dramatically change horizontal movement, so this appears to be very real, and makes placing an actual classification on the pitch a little easier, as it clearly rules out a cutter, and puts him with a lot of sidearmers or lefty specialists. So while his arm may not come out as much as a "sidearm" type pitcher's might, his pitches can move somewhat like those of a sidearmer, and he is clearly not throwing very hard.

If we look at the pitches I am calling a changeup, the pitches that spin heavily, they average 78.7 MPH. This is a slow changeup, but frankly, it is slow for really any pitch except a curveball or special pitch. It's movement actually makes more sense as a breaking pitch than an off-speed pitch, but we will see the problem of classifications with his next pitch.

The average slider, what I am calling a slider with the speed and spin graph, averaged 79.8 MPH, with .857 horizontal movement and -2.091 vertical movement. This negative movement suggests that the pitch is actually a curveball (this is what the manual tags at Brooks Baseball call it). However, no other left-handed bullpen curveball in 2012 got that little vertical movement. Only 8 lefty bullpen curveballs in the Pitch F/X era have that little vertical movement, and they are all slower than McFarland's. These eight seem to be decent whiff curves, but horrible groundball curves. When you look at pitches that are still classified as sliders despite the "negative" movement, we see that Nick Hagadone provides a somewhat similar comparison based on movement. Hagadone's "slider" is thrown nearly 4 MPH harder than McFarland's, but Hagadone's average fastball is also about 5 or 6 MPH harder than McFarland's as well. However, we see that Hagadone's "slider" (looking at the sliders in the outing he has thrown the most pitches in for his MLB career, just 34 pitches) has some pretty inconsistent spin 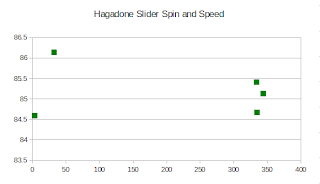 McFarland's spin is most similar to a traditional curveball. Whatever McFarland is actually throwing is a strange breaking pitch without a ton of movement (it is hard to judge velocity because it is hard curve yet a soft slider). It is also his least frequent pitch so far (according to my classifications, as the MLB AM classifications say he throws it significantly more, I am basing my classifications on the spin and speed graph) Since we are considering the "moving fastball" above as a considerably separate pitch, this pitch is not all that important, because he is a reliever and it is his 4th pitch. It is also where the Casey Fossum comparisons end or take a significant turn, as Fossum relied heavily on a slider that looked different than McFarland's. 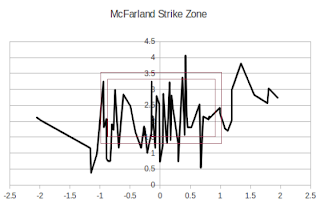 This is a small sample size, so we have to be careful, but it seems he would like to work low and inside/down the middle. I think this supports the idea that he isn't throwing a lot of sliders (though he could just be missing, which would be hard to prove without looking at actual video and catcher targets, especially since he has a repeatable delivery and arm slot), as we would expect them to sweep away from lefties. Instead, he is working with a lot of armside low fastballs, something that makes sense for a soft tossing, but not real sidearming, lefty.

So far, the Orioles have not used him as a LOOGY, instead, using him sparingly as a long reliever. How to actually classify him and his pitches is sort of difficult, as we are seeing that he is a pretty unique pitcher. One could change the labels I used and make an argument that he is a fastball, changeup (instead of moving fastballs), slider, and curveball pitcher (or two different breaking balls). This is a decent assortment of pitches, especially out of the bullpen, but other than the horizontal movement, none of these are really plus. There just isn't a lot of upside here, especially since, if you wanted him to be a starter, his fastball would lose even more velocity. So if the Orioles are going to continue to carry him, it shouldn't be because they think there is some future value he can provide. It has to be because he is a decent control lefty out of then bullpen. He may have some fringe value, but I wouldn't do backflips to keep him on the roster, as he is not a long term solution in either the bullpen or the rotation for a MLB team, especially in the AL East.
Posted by Unknown at 4:15 PM