The Mexican League Diablos Rojos del Mexico played the Texas Rangers' in a game at the Ballpark in Arlington. This means we got Pitch F/X data on some pitchers we wouldn't normally get data on. Later in the week, I plan to write up some notes on some of the position players in the game.

In this post, I am only looking at the data of two of the pitchers. I have already written about David Reyes, and Esteban Loaiza threw a max of 82.6 MPH and has been out of the Majors for years.

Lozoya is interesting because he is listed at just 5-8. 5-8 is usually blogger height or perhaps middle infielder height. Just 20 years old, Lozoya broke into the Mexican league last year, pitching in 5 innings (in 5 games). Despite the lack of height, he releases the ball about 6 feet high: 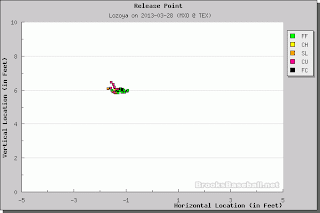 When looking at his pitches, ignore the listed cutter as that moved just like his other fastballs, and spun like it as well. The manual tags do this, but they also call one of the curveballs a slider. This makes sense in both movement, and by spin, as you can see below. 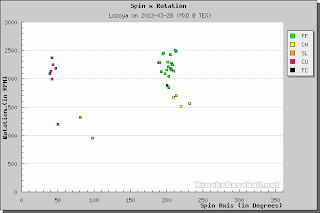 Lozoya also got very good vertical movement on his changeup, curve, and seemingly his slider as well. One theory could be because he is releasing the ball above his height. However, a quick look at his strike zone doesn't suggest he was "getting on top of the ball" or keeping the ball low.

The lack of velocity of his pitches with the addition of his vertical movement, makes him look like sort of a fringey MLB reliever that could perhaps be above replacement level (though he is hurt by his height, which probably rules out an ability to throw multiple innings consistently, though that is not a huge part of many bullpens in the Majors anyway). His height and body size seem to say that he won't add much more velocity if any. He does have quite a selection of pitches, which can make him interesting as a pitchability guy out of the 'pen, but it is obviously too early to really project his command.


Arturo Lopez got a cup of coffee with the San Diego Padres in 2009, but now the 30 year old is pitching Mexico for the Diablos Rojos. He also pitched for the Padres in spring training this year, but must have been released. In 2009, his fastball averaged 92.41 and he threw a slider and change in the mid 82 MPH range. In his outing against the Rangers, we see where his velocity has dipped, down to 90.75 MPH on his fastball, with the change dipping under 80 MPH and the slider at just 80.16. He really struggled in the Mexican League last year according to ERA (well over 6), but had a decent 3.98 kwERA and a manageable 1.1 HR/9IP in the very hitter friendly league.

It is always interesting to see how release points change over time. The data suggests that he is releasing the ball slightly higher, and much closer to the middle of the plate/his body:

What does this mean? Well at least in the Mexican League over the last two years, he has had basically no platoon splits. You would imagine that the previous release point would lend to big platoon splits. Obviously his short MLB time is way too small of a sample size to look at platoon splits (though interestingly, he had the platoon advantage just 41% of the time in the 17 batters he faced, suggesting that the Padres didn't think he would have platoon splits), and it is hard to find split data for minor league games before 2010. As far as consistency goes, we see that Lopez has had some problems this spring repeating his delivery, but it isn't horrible (but enough to make the large amount of walks believable).

We see that the overall movement on his pitches has also regressed. This isn't surprising considering his age or loss of velocity, but it is notable. It seems that while Lopez has improved because of his release point, he is on the wrong side of the aging curve, and since he wasn't able to establish himself with better velocity and better movement, it seems that he is not a MLB pitcher, and probably in the Mexican League for the remainder of his career, where he should have some success.