Should Pitch F/X Change Our Opinion of Ryu Hyun-Jin?

Ryu Hyun-Jin made his MLB regular season debut on Tuesday night, pitching against the San Francisco Giants. The results were not bad. He gave up 10 hits in 6.1 innings, but just 1 run before he left (he left with two runners on base, and they would score on an error with the reliever in the game), walking none and striking out 5. It was also his 2nd Pitch F/X outing since coming to the United States (we have one from the 2009 WBC). I wrote a scouting report on Ryu in September that was mainly based on the eye test, and since then much has been written on Ryu, but here, I wanted to see if Pitch F/X data gave us a better insight into Ryu and actually change how we can rationally view him in the context of the MLB.

Ryu didn't walk anyone, and we also see that he repeated his delivery pretty well (other than some high curves, which isn't that unusual):

The release point does appear to be low and out though. When you are looking at lefties that are similar to Ryu in that regard (as far as actual fastball release point), Anthony Vasquez is a somewhat close comparison (though Vasquez is out more), with Aaron Laffey a little higher, but Jeremy Sowers was the best comparison I could find. Obviously none of these are flattering when it comes to Ryu as a starter.

When looking at his actual pitches, we see that Ryu's curveball is very spinny, but his fastball doesn't spin much at all, as most curves do not spin or rotate much, and most fastballs spin between 200-250 degrees: 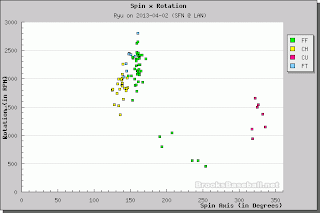 There seems to be some classification problems with the stray fastballs you see above. This also shows up in the movement chart and the speed chart as well. They don't seem to be changeups either. The manual tags at Brooks Baseball have labeled them as a slider. It appears to be the pitch I labelled a splitter/slider in my scouting report above. The spin of the pitch definitely make it look like a splitter.

If you take out the 5 or 6 fastballs (the slider/splitter) that are slow, his average fastball (including the moving fastballs, which Brooks removes as well) was 90.11 MPH. This is below average, but it is higher than J.A. Happ and right at where Jonathan Niese has been (both pitchers recently received extensions). Ryu's average horizontal movement of those pitches was 4.53 with a vertical movement average of 10.84. This is really closest to Wandy Rodriguez in movement both vertically and horizontally, and Ryu throws harder than Wandy (by nearly a full MPH using the above fastball velocity)

Of course, Wandy is known for his curveball, and we saw that Ryu's curveball is really unconventional. Against the Giants, his curve got down to 69.86 MPH, and averaged 70.54. This is one of the slower curves in the big leagues and its closest comparison is the guy that Ryu has often been compared to, David Wells. Wells also had the heavy spinning curve, and despite being so slow, it was effective (50 wRC + against in 2007). Ryu's curve is the same horizontally, and actually better vertically (it is difficult to compare Ryu's curve to Wandy's, as Wandy throws his over 6 MPH harder, but the horizontal movement is better for Ryu, while Wandy gets slightly better vertical depth or movement). Niese and Doug Davis provide similar curves horizontally, but both get better depth and Niese throws his harder. They both also have spinning curves (Wandy does as well, and it seems to be much more prevalent in lefties than I thought it was).

Overall, the average pitch Ryu threw was 85.11 MPH (85.82 MPH average when using Brooks Baseball's adjusted MPH). This is closest to Mike Minor out of left-handed starters.

Here is Ryu's velocity, combined with his movement (the average of horizontal and vertical) on all his pitches compared to the pitchers we have mentioned in graph form: 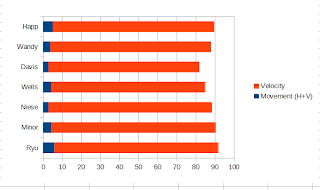 Ryu looks better than a bunch of mid to back of the rotation left-handers. Ryu has a average combined movement (which is sort of a vague concept more than a real thing since it uses an average of the two) of 5.89. The average is about 4.03 for left-handed starters (minimum of 100 pitches).

Of course (especially since people don't combine movement like I did above, and it is somewhat of a vague concept), we need to test the relationship between overall movement and success. I narrowed it down and looked at whiffs/swing compared to the other lefty starters. I sorted by lowest movement to highest movement, so if there is a correlation, we would expect whiffs to get higher from left to right: 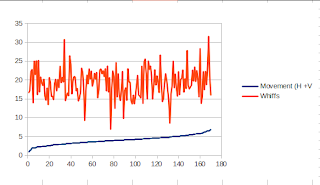 There seems to be something there, especially towards the end with the "elite" movers. If you look at the starters that have better overall movement than Ryu's 5.89, they have an average Whiff/Swing % of 20.94, which is above average (about the top third).

We also need to look at average velocity of all pitches. So I did the same thing, I started with lowest velocity, so if velocity has a correlation, we would expect the red whiffs to go up: 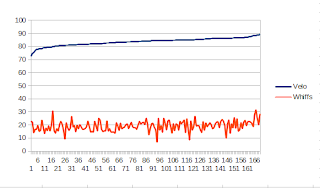 It is a little tougher to see here because the whiffs are smaller, but it appears there is some correlation there, even if it isn't real strong. A look at the numbers show that it is more top heavy, as the top 9 (the same sample we used above when looking at movement) had an average whiff/swing percentage of 24.18, much better than the movement data.

Pitchers that move the ball and throw the ball harder on average are able to miss bats more so than pitchers that don't, this surprises no one. But, it seems, from the data we have looked at, that Ryu fits right in there as a pitcher with good velocity and good movement.

Since we have been looking mainly at his one outing with the Dodgers, it is important to take in to account the park factors that come Pitch F/X. According to studies, the vertical movement and velocity gets a boost, while the horizontal movement goes down. So we might temper the data a little bit for Ryu, but even if you regress the data a little, he still fits in with guys that fit in the middle of the rotation pretty well. Also, it seems that his release point, which is really the most concerning data point we have ran across, looks a little better once you take into account the park factors.

I think the Pitch F/X data shows that Ryu has solid MLB stuff. He obviously isn't an ace or top tier pitcher, but no one really claimed he was one. Predicting and projecting pitchers is an extremely difficult task, but Ryu should be a middle of the rotation/league average/100 ERA - type starter in the big leagues.
Posted by Unknown at 6:57 PM