A look at young Astros' pitchers: Clemens, Cisnero, and Oberholtzer

The Astros beginning the 2013 minor league season by using a tandem rotation in their upper level affiliates, along with some short starts by the starters on the big league club, have allowed them to use some of their younger pitchers in long relief stints. I want to look at the Pitch F/X data of three rookie Astro pitchers  we have seen early on this season, Brett Oberholtzer, Jose Cisnero, and Paul Clemens.

Oberholtzer and Clemens were acquired from the Braves in the Michael Bourn trade, while Jose Cisnero is a 24 year old that was originally signed out of the Dominican Republic. In this post, I am only looking at Oberholtzer's 2013 outing as he had an end of spring outing in 2012 that Pitch F/X tracked.  I am also not including Paul Clemens latest outing since I already gathered all the data for the article and had started it when he appeared on the 24th.

Here we can compare their release points: 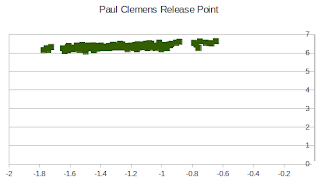 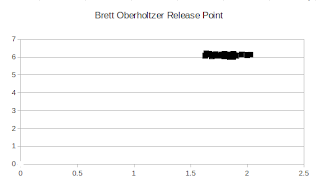 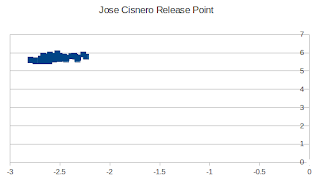 As you can see, Clemens is probably moving around on the rubber. I thought the difference was when he gets to 2 strikes, as he lets go of the ball closer to the center of the rubber, at about -1.16 feet from the about -1.3 feet he normally does. This change is bigger than when you look at release point for opposing hitter platoon. However, it isn't as big as when you break it down by pitch types. The fastballs are thrown the furthest out, while the changeups are thrown a little closer to the center, and the breaking balls even closer (which would explain the two strike difference, as most pitchers throw more breaking balls in 2 strike counts).

I wanted to see if I could see it in screenshot form: 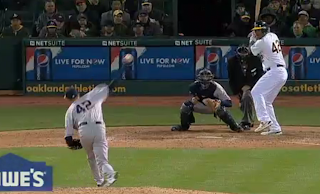 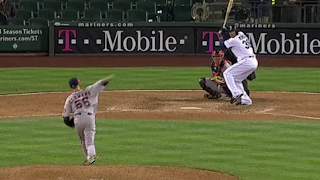 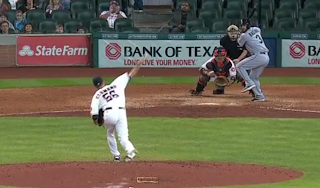 I can't see a difference in where he is actually standing on the rubber, or at least the fastball is not the significantly more on the right-side of the rubber than the other pitches. It is hard to be definite by looking at just one screenshot apiece, as it can be deceiving, especially if they are taken at different times of the delivery, but his delivery definitely looks the best on the fastball screenshot. Again, I don't know if we should read too much into that. He does seem to be yanking the curveball though, as we can see by his strike zone: 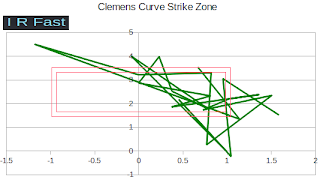 Jose Cisnero is the most "out" of the group, while Clemens releases the ball closest to the center of the rubber. Oberholtzer's seems to be the most consistent, especially vertically. Cisnero's also has the shortest release point out of the three. Cisnero actually has the smallest platoon splits (according to FIP) out of the three (which you wouldn't expect), with Oberholtzer's being by far the biggest (1.18 FIP difference). Not surprisingly, Oberholtzer had the best strike percentage in the minors out of the three, while Cisnero and Clemens were tied at a respectable 62.2 %.

What about stuff and pitches? Here are their spin and speed charts with some simple classifications: 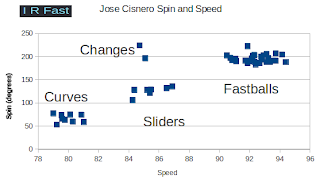 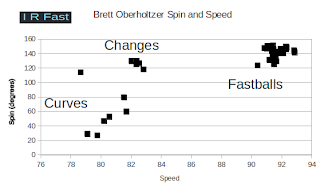 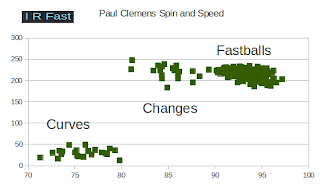 Velocity wise, they all have at fastballs that are at least average. Since he is a lefty, we shouldn't be surprised that Oberholtzer has the worst stuff, both by velocity, and just an overall lack of spin on the fastball and change. Clemens clearly has the best stuff, both by fastball velocity and fastball spin, and he also shows quite a bit of range on his fastball, sometimes throwing 90, other times throwing 96 MPH. Cisnero shows off the biggest variety, with 4 different pitches.

Oberholtzer's curve is interesting because it has curveball movement (MLBAM tags wanted to divide the pitches I labelled curves into curves and sliders) yet a little spin like a slider might have, and slider like velocity, especially compared to his fastball velocity.

In conclusion, all three clearly have their flaws, but they all have different skill sets that could help them get hitters out in the big leagues. Because of his release point, I question whether or not Cisnero can be a MLB starter without a changeup he throws a lot to keep lefties off balance. The mix of pitches tells us he may be a decent long reliever though. Oberholtzer is a command lefty, without great stuff, and the curve doesn't have the vertical movement you would want it to. The ceiling is a back end type starter, with maybe a low leverage reliever as a MLB floor (the release point doesn't scream specialist). Clemens is the most interesting of the three, but also the most likely to fail in a starter role because of the strange things going on with his breaking/off-speed pitches. If nothing else, he can be a plus fastball/curveball reliever and work in relatively high leverage roles.
Posted by Unknown at 9:19 AM