According to recent reports out of Japan, the Chunichi Dragons of the NPB are interested in Athletics' reliever Chris Resop. Resop spent 2013 split between the A's AAA team and MLB team, pitching well for neither. Former KBO pitcher Brian Gordon had a 2.45 FIP on the same AAA team, and former NPB reliever Hideki Okajima had a 3.24 FIP on the team. Resop's was 4.66, striking out less than 18 % of batters and predictably struggling with homers in the hitter friendly PCL. In Oakland, he was worse, striking out even fewer batters in his 18 outings and struggling with walks. For his career, Resop has been a good example of a replacement level reliever (0.0 fWAR, .2rWAR, 1.0 WARP), pitching in MLB games in every year except 2009 since 2005, totalling 243.1 innings pitched.

Resop pitched has pitched in Japan before, in 2008 with the Tigers, but it didn't go well. He made 8 appearances with the Ichi-Gun team, four of them starts, and struck out just 6 of the 99 batters he faced, giving up 18 runs. In the Ni-Gun, he had better peripherals (21K/6 BB out of 84 batters faced), but still had an ERA over 5. So certainly statistically, it is a little curious why the Dragons would be interested in Resop. The Dragons have used three foreign pitchers in 2013, and they combined for a strikeout percentage of 14 % (Central League average is about 17.6 %), so they clearly need foreign pitchers who can miss bats next year (Daniel Cabrera will be back, Brad Bergesen will not be, and from what I have read, Warner Madrigal's status is still up in the air), but Resop has a history of not missing bats.

It was a year before Yahoo data was tracked by NPB Tracker, but Resop did pitch some in the Majors that season, and his average fastball out of the bullpen was 93.4 MPH. Using the roughly 1.5 MPH difference from starters and relievers that we see in the Majors, Resop's average fastball was probably about 92 MPH or lower in Japan, which is probably about 4 MPH better than a league average NPB starter. So it is not hard to see why he was attractive to the Tigers, he threw pretty hard, it just didn't translate to him missing any bats.

I couldn't find any video of him in Japan, so we will use MLB Pitch F/X data to evaluate Resop and see whether or not there are reasons to expect that he will be better in the NPB if given another chance.

Here is where he located his pitches, along with their velocities in 2013 with Oakland:

He is clearly a low ball pitcher, even though he is not extremely tall for a RHP in the Majors (listed at 6-3), he is taller than 9 of the 10 Dragons' 2013 leaders in IP (only the gigantic Daniel Cabrera is taller). Height does appear to be something NPB teams look for in foreign pitchers because of scarcity in their own countries. Stereotypes aside, the average Japanese male is 5-7, while the average American male is 5-10. The country of Japan also has just over a third of the amount of people that the United States has, so just by sheer probability, the United States, and thus the MLB, are likely to have more tall people to spare than Japan. We see this play out in the NPB's acquisitions of foreign hitters as well, as Japanese teams are much more likely to go after sluggers like Wladimir Balentien and Michael Abreu than go after speed and defense players. That doesn't mean there aren't some tall Japanese pitchers or big powerful Japanese sluggers, because there are. NPB teams just appear to feel that these roles are easier filled by foreign players, while speed and defense players, along with sidearming or "junkball" pitchers are easier to fill using the drafting of native players. The problem is, Resop doesn't appear to be a hard thrower anymore, falling under MLB average for reliever fastball velocity.

For reference, here is what his release point looks like in picture form: 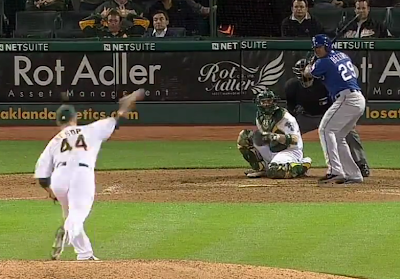 Even though he gets the ball low, he doesn't seem to do a great job of using his height, as it seems that he isn't very upright at the time of release, perhaps having a bit of arm drag (though it could be overstated, as he still does an adequate job of staying upright). Here is what his release point in graph form looks like compared to the 2013 Dragons that have pitched in the Majors, using Pitch F/X data:

His release point is under 6 feet, but it is pretty close to the center of the plate, not coming too far out for hitters from the left side to pick up too easily.

For a more full look, here is a GIF of his delivery, and a home run on a low sinker:

Since I have only done the Pacific League when looking at the deliveries of NPB pitchers, we can't compare his deliveries to Dragons' pitchers, but we can flip through the deliveries of some of the pitchers in the NPB that he compares to. To me, he has a pretty simple delivery, coming mostly straight forward. He doesn't pause or hesitate, but it seems he is a little slow to get started. His front leg leads you to believe he is coming forward, but he holds his body back for just a split second. The delivery itself reminds me of the deliveries of Brian Wolfe, Ming-Chieh Hsu, and Yoshihiro Ito. Those are three different pitchers, as Wolfe is a command guy, Hsu is washed up and didn't miss many bats, and Ito walks more guys than league average, but misses much more bats than the other two. Because of Resop's strikeout history, he is closer to either Hsu or Wolfe. If the Dragons sign Resop and he pitches like Wolfe, they are thrilled, but the last time he was in Japan, he pitched like Hsu. His release point reminds me of Darrell Rasner's, though Rasner is more upright and more ideal (perhaps ironic since he just had Tommy John Surgery), who has started games in the Majors and has been a successful closer in the NPB.

For his career, Resop is mostly better against righties as you would expect, but he doesn't give up near as much power to left-handed batters. This may be randomness, but could also be because he keeps the ball away from lefties.
The only pitch he gets glove side is his slider, something he doesn't use a lot (in fact, this year was clearly the most he had ever used it). He also started using the changeup a lot more in 2013.

Perhaps the uptick in secondary pitch usage will allow him to be a successful starter again like he was in AAA in 2010, but I don't think the diminished fastball, along with the statistical eyesores can be ignored. He is someone that has been on NPB radars for a while, as he was also rumored to be heading to Japan before the 2013 season, but I don't quite see the value. The Dragons should look elsewhere, to someone who has a more defined role, or at the very least, has a longer history of missing bats.