The 2nd part (rounds two through eleven) of the Korea Baseball Organization draft took place on August 25th. The under 18 team has been playing in the Baseball World Cup, which has given me the opportunity to watch some of the players online. Below are notes on some of players on the team.

Good size (6-1), a little slender (176 pounds), so he could add some weight and and power. He flailed at some outside pitches and his swing looked a little long and had a lot going on mechanically. He was really tied up on an inside pitch. I thought he had a good swing path overall, though it didn't seem he could adjust it well, meaning he didn't change his bat path to where the ball was pitched.
His plate discipline seemed okay for his age. He packs some power behind his swing and appears to be somewhat athletic.

A lefty, slap/groundball hitter (though he did scream one line drive hard up the middle). The infielder chokes up on bat, and has no pop, so it is bad when he hits the ball in the air. He will generally lay off pitches thrown low and away., but struggles to stay back on breaking pitches in the zone. A little too ansy, he has too much going on for him to be a disciplined hitter right now. Still, the bat control makes him a bit of a tough out even though he doesn't hit for power. Probably an above average runner, but doesn't have eye popping speed.

Kim Ha-seong Nexen Heroes 4th round
He has some room to fill out at 5-10 154, which makes 3rd base a somewhat logical position. Seemed to play it well, with good reaction times and athleticism.
I didn't see the bat speed though, and he had a lot of whiffs, struggling as a hitter.

Sim Woo-Jun KT Wiz Compensatory round.
SS may have to move off the position just by frame (6-0, 165 right now). He had a couple of wild chases, and doesn't really move feet while swinging, which I think hurts his ability to reach for pitches. I am not in love with the swing path, just really struggled at the plate.

An Jung-yeol KT Wiz Compensatory round

A catcher that already looks filled out, but is only 5-10 so he is not that large. I am not sure about the bat speed, but he has good bat control. He probably has some pull power and sometimes has a large violent swing (but cuts it down with 2 strikes). Still athletic and can run pretty well.

I like the size and potential to fill out (listed at 6-0 165). A left-handed hitter, he finds his body falling out of the box (though not necessarily his legs) on inside pitches. Good contact tool and bat control, but he will chase breaking balls. He's looking to pull the ball mostly, low and inside is his real sweet spot. I think he has to stay back on the ball a little bit more though. He's got plus speed, and took second on a pickoff play at first.

A 2nd baseman with good range made a nice play defensively. The arm appears to be a question. Offensively, he yanked a ball hard but I don't think the bat speed is great.

He seems to have some plate discipline, but is probably too pull happy. He is not much of a runner, which isn't surprising considering he is listed as a catcher.

Han Joo-Seong Doosan Bears 1st round
RHP with good size (though listed at 5-11 176)
88-89 MPH fastball
74-79 breaking ball with good vertical drop. It wasn't "sharp" (looked like a curveball). He could throw it for strike and was a very good pitch against righties

Lee Su-min Samsung Lions 1st round
LHP (5-11 181) that has a lot of motion in his delivery, as he comes up, pauses, comes back down, pauses again, with a somewhat odd short arm action. There is a slight tilt that hides the ball a little to right-handed batters.

He was mostly 85-86 MPH on the fastball and could sometimes get it to come back arm side with good movement. Other times it just stopped in the strike zon and was very hittable.
He got good sweep and two way movement on his slider.

Ahn Kyu-Hyun Samsung Lions 1st round
Sidearming RHP, which seems strange for a 1st round pick (though the first round in the KBO seems to have a lot more to do with securing players that teams have territorial rights on than actually picking the best players overall).
For the most part, he still has a mostly upright posture, he just drops his arm at the time of release point: 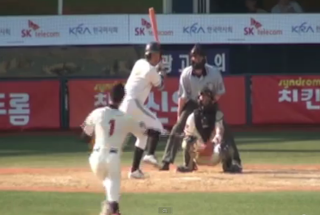 GIF of entire delivery and one of his sliders

83-87 MPH quite a bit of two seam movement
71-73 MPH change also moves arm side
69-72 MPH slider not a lot of sweep, but it gives him something to throw away to righties.

Thanks to both Danny K and Baseball in Korea for the help with videos, streams, and rosters.
Posted by Unknown at 6:09 AM