I picked 50 batters that played at least 20 games in the Dominican Winter League in 2011, and compared the OBP and OPS of their Winter League season and compared it to their MLB or AA numbers (sometimes both). A few didn't have either, so I put their A numbers and then put up just about everyone's A numbers afterwards so we could go ahead and create a A metric. Click the picture to enlarge of course (the best bet is to right click and open in new tab and zoom) 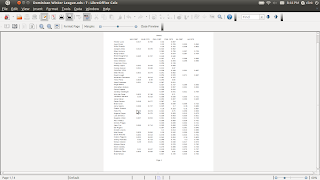 The average OBP in the DWL by the players surveyed was .313, while the OPS was .662. Of the 24 that have MLB experience (at least enough to qualify, I set the cutoff at about 50 games), they averaged an OBP of .299 and OPS of .664. However, we do have a AA metric, so we will project the players that have AA statistics but no MLB statistics and then we will be able to calculate both a A metric and a DWL metric. Projections are in bold (-.058 OBP from AA to MLB, and -.136 OPS from AA to MLB) 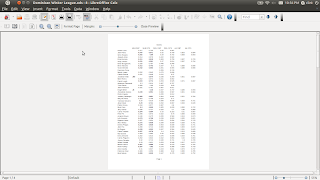 So the 48 Projected/Actual MLB players averaged a .279 OBP and .630 OPS. This means that from DWL to MLB, there is a -.034 OBP and -.032 OPS (which means that the Slugging actually improves a little bit in the MLB, suggesting that the DWL is not exactly a friendly slugging environment). For some perspective on Venezuelan League Statistics, I would direct you here: http://mlb.sbnation.com/2012/1/3/2679279/venezuelan-league-stats-carlos-zambrano-bryan-lahair