As the Australian Baseball League 2011 season wraps up, I thought it made sense to come up with a pitching metric to evaluate pitchers pitching in the league. Since we didn't come up with a reliable A and AA pitching metric, I filled out the rest of the spreadsheet with minor league pitchers (from the White Sox system) who had pitched at all 3 levels. 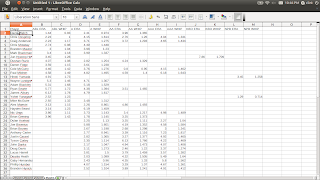