Scouting Reports on Tarleton and McMurry

On Saturday (February 4 2012) we saw the University of Tarleton play McMurry. The wind was blowing rather strong, but not overpowering. The umpire had a wide and pretty inconsistent zone affecting the outcome of at least 2-3 at-bats. Tarleton won the game 2-1 on a walk-off hit.

The most impressive player by far was relief pitcher Britt Robertshaw. He is a 6 foot 3 inches pitcher who previously pitched at Northwestern (of Louisiana) and Blinn College. He throws in the low nineties, reportedly getting all the way up to 96 MPH. He was by far the hardest thrower in the game, and he kept the ball low in warmups but put it all over the place during the game. He reportedly has 4 different pitches, but he only threw fastballs in the game (he really didn't need any other pitchers in the game). He struck out two (with a wild pitch) and got a weak groundball in 1 inning of play, stranding both inherited runners. At Blinn as a freshman, he really struggled with a 7.60 ERA, 6.75 K/9IP, and just one more strikeout than walks. At Northwestern, he was no better, with a WHIP of 2.76 and over twice as many walks as strikeouts in 12 games (11 of them relief appearances). He has had some injury problems, but passed the eyeball test with a good enough fastball, and if he can develop a breaking ball pitch, he may be a prospect.

Matt Buckmaster was the starting pitcher for Tarleton. I was without a radar gun, but he didn't throw very hard, and he had an okay pickoff move. He gave up 7 groundballs (with a GIDP), 2 flyballs, and 7 line drives. He struck out just 4 and walked 2, giving up 1 run.


The starting pitcher for McMurray was Spencer Smith, a 6 foot Junior from Amarillo. He was kind of big (Sidney Ponson-ish), but didn't throw that hard. He had an awful pickoff move, but he did keep the ball low. His breaking pitch was interesting, as it had good speed differential and solid movement, but he couldn't get hardly an swing and misses. He got 9 groundballs versus just 3 flyballs (including one to the warning track, about 360 feet), and one linedrive. They made a lot of contact off of him (just 2 strikeouts), but they didn't hit the ball very hard (excluding the near miss home run). He did hit two batters and walked 4, so control wasn't always there. In 2010, Smith really struggled with an ERA over 10 and a BAA of over .350. It seems he, at least what we saw, has improved since them. However, since he is a contact style pitcher, his control problems are very concerning. Pitchers who can't miss bats at this low of a level seldom stand a chance.

Other pitchers who pitched in the game included Jacob Detoni, a 6-2 Freshman who gave up 5 groundballs, 2 flyballs (one deep and one in the infield), and 1 linedrive. He was sort of deceptive with a soft breaking ball, it at least seemed like he was throwing harder overall. You would thought he would have struckout more, but he only struck out two, one on a very questionable call. He also had major control issues, with 2 wild pitches, a HBP, and a walk. Kenneth Stockton had really questionable control (wild pitch), not much of a pickoff move, and gave up 2 line drives, a hard grounder, and an infield popup (also struck out a batter).

Tarleton had a definite "small-ball" approach, and cost themselves 2 outs in the first inning. Evan Robinson was the starting shortstop (who had the walk off hit in the game), and had a failed sac bunt attempt, a 3 pitch slap groundout, a soft flyball double, a flyball single, and a five pitch groundball. He is just a freshman out of high school, but he is small, listed at 5-7, 155 LBS. Andrew Wolfe was a senior outfielder who hit at the bottom of the order. He tried, unsuccessfully, to bunt for a hit, grounded out, sac bunted (on the second strike), with a 5 pitch walk. He had decent speed, and is a little bigger, but not very large with virtually no power. Jared Musgrove is listed as a catcher but DHed and was pinch run for (by junior Ty Crump, who we didn't really get to see run, but had a .200 BA and .385 OBP in 10 ABs for Grayson County College in 2011). He had a 5 pitch at bat where he hit a hard grounder, was hit by a pitch, and fell for a breaking ball out of the zone during a 4 pitch at bat that ended in a ground out. He is a sophomore who is about standard size for Tarleton, at 5-10 175 LBS. Christopher Patton is a sophomore outfielder who had a 5 pitch foul ball out, a 2 pitch medium flyball out, a 3 pitch grounder, and a 4 pitch short swing liner (3.5 P/PA). Noah Ringenberger is a junior outfielder who also pitches (he didn't pitch in the game we saw, but had a 5.65 ERA in 14.1 innings at Northeastern State last year). He had a 4 pitch walk, a 1 pitch groundball double, a 6 pitch infield pop, and a 2 pitch groundball single (just 3.25 Pit/PA). He should have had a stolen base, but a HBP canceled it, and then he was later thrown out trying to steal third.
Ryan Small was the catcher, and he had a strong, but inaccurate arm. He did make a great stop behind the plate and seemed to know what he was doing back there. He was HBP, had a groundball chop, a one pitch groundout, and a 2 pitch line drive. He played Junior College at Midland, and is currently a junior. Austin Coble is a relatively small junior who can also pitch. He had a 4 pitch weak groundout, a 6 pitch strikeout looking (at a pitch that looked off the plate), a 7 pitch strikeout (where he chased a pitch out of the zone), and a 1 pitch ground out. Landon Thompson is a very similar player who can pitch as well, but is a freshman instead of a junior. He had a 1 pitch ground-out, a 1 pitch flyball, a 6 pitch strikeout looking, and a 6 pitch walk. Even though he chased one pitch out of the zone, he seemed to be a passive Sam Fuld type hitter. Thompson also leaves one wanting when it comes to speed, as he is rather slow.

Garrett Hardey was by far the most impressive hitter out of either side, and I would rank him the second best player on either team (behind Robertshaw). He is a 6-5 senior firstbasemen who is listed at 215 LBS, but looked very scrawny. At first he had a nice arm, and made a good pick. At the plate, he had a 4 pitch groundout, a 4 pitch strikeout, a 5 pitch walk, and a warning track shot that went about 360 feet. He seems to have power, but one would hope he will fill out more (even though he is a senior, which makes it more unlikely). He did struggle some with breaking pitches, so if pitch recognition is actually a problem, then it hurts any kind of value he has immensely. At West Texas JC, he batted .346, with a SLG of .586, with 21 walks versus 29 K's. He appeared in just 19 games last year with Tarleton and struggled.

McMurry was a horrible fielding team, the epitome of which was the 2nd baseman Marcellus Biggins, who had defensive struggles the entire game and eventually made an error. He had big size (he reminded us of Delmon Young with his body build, and furthered the comparison with his bad defense and a chasing of a high pitch). He had a 7 pitch ground-out, a 2 pitch ground-out, a 5 pitch line drive, and a 5 pitch strikeout where he chased a pitch way out of the zone (a 4.75 Pitch/PA in the game though). The third baseman, who we believe was Jacob Bermejo, fell down on a key play. With the bat Bermejo had 2 line drive outs and a 5 pitch infield hit. 1st Baseman Matt Thompson (who went to high school at Southlake Carroll), had an error as well. He had a 6 pitch medium depth flyball, just missed a double down the line (but it went foul), and a 3 pitch GIDP. The LF for McMurry also made a throwing error. There were positives on defense though, as SS Kory Moench showed off a good arm, and had a 5 pitch walk. He also hit a hard grounder, another 1 pitch ground-out, and a line drive out. Brad Baker was the catcher for McMurry, and he showed off a good arm and made a great diving grab on a foul ball. He did seem to have a major whole in his swing though, but had a 7 pitch at bat, a 5 pitch infield popup, and a 3 pitch medium flyball. The strangest thing about him was his size, as he is just 5-4 160 LBS.
Here is Baker (I would have taken more photos but my hands were way too cold to operate my phone): 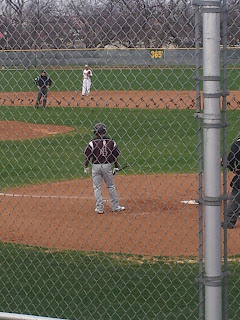 Thanks to David Withers (Big D of football picking fame) for helping with this post.
Posted by Unknown at 5:28 PM