We have already done several articles on college projections here, however, we discovered recently that drafting high schoolers brings a better return (or at least a higher ceiling). Because of this, we have to figure out how to project high school players.

I had to be a little creative with finding high school stats, because many times they are hard to find, especially for past seasons. I used batting average for high school because that was a whole lot easier to find. While batting average is a rather flawed statistic (see my article on Kala Ka'aihue), I have shown previously that it has about the same correlation to scoring runs as OBP (right click on the
image and zoom in to see it). 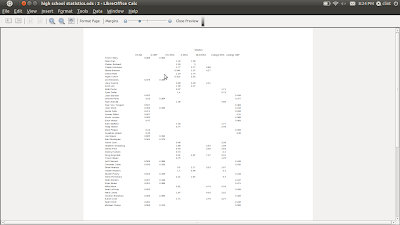 There seems to be a decent correlation between the ranking of high school batting average and A-ball OBP. The big exception is Matt Weiters who both in college and A-ball had a better OBP than high school BA. This could be two different reasons for this: A) he was a late bloomer type, while good in high school, he wasn't dominant like he was in college or A-ball or B) walks, walks, walks. He could have had a giant OBP in high school.
The biggest "bust" (great BA in high school and extremely low A-ball OBP) in the group is Jon Edwards. But that is just 1 out of 13, which is still a pretty good success rate, all 13 having .400+ BA in high school and being above average in A-ball. Rather than coming up with a metric, it may be more helpful to just note that any player in Major High School baseball with a .400+ BA is probable to have success in A-ball, and give out extra points for power, patience and defense. All 6 players with .500+ BA that have played A-ball have above average OBPs.We saw a similar correlation between high school and college, as all 7 .500+ BA guys were .360+ OBP guys in college. Once, you got into the .400s it got more tricky and was all out of order. I count 5 different players that had higher College OBPs than high school batting averages, while several others saw sharp decline. So strangely, there seems to be a better correlation between high school to A-ball than to college.

In our small sample size, there isn't really any correlation between high school ERA and College ERA. Even the guys that had ERAs under 1 in high school all had varied amount of success at every level. It didn't guarantee success. This is probably because ERA is a much more volatile stat than something like strikeouts. I would guess that a similar list showing K/9IP rather than ERA would provide a better correlation. Strikeout rates are a little harder to find for high school players, but they would be much better than ERA. Along with strikeouts, I would also look at velocity, which is one of the first things scouts look at anyway.
Posted by Unknown at 10:11 AM