27 year old Angels' right-handed pitcher Matt Shoemaker made his MLB debut at the end of the 2013 season, making a start against the Seattle Mariners. He went 5 innings, getting all but four batters out (2 hits and 2 walks), with five strikeouts, no runs allowed, and a wild pitch. Clearly one start is not going to give us too much insight into Shoemaker statistically, especially against the Mariners, a below average offensive team. Shoemaker making that start is most likely a product of a weak Angels' system, with very few upper level pitching prospects to be able to fill in when their starters are injured or underperforming. Shoemaker has made 64 starts in the PCL, usually a sign, especially at his age, that he is going nowhere as a prospect. The PCL, especially in parks like Salt Lake's, is a pitchers' nightmare. However, while he was slightly better on the road, he didn't have big home/road splits. I figured the best way to deal with his stats in the PCL would be to use kwERA like we use to evaluate NPB pitchers in an extreme environment the other way. Shoemaker had a 3.94 kwERA in his time in the PCL, while league average in 2013 was 4.16, suggesting that, at least by strikeouts and walks (Shoemaker was a low walk, medium strikeout pitcher with a passable but not not impressive groundball rate), Shoemaker is a better pitcher than the run of the mill average PCL pitcher. Shoemaker is slightly older as well, just turning 27, with the average pitcher being about 26.6 years old in the league.

Of course, AAA statistics are less predictive for success in the MLB than velocity and pitches, so let's start the evaluation of his Pitch F/X data by looking at his spin and speed chart from the game against the Mariners (his only outing that has Pitch F/X data for his career), which should give us an idea of what he throws:

There seems to be four clusters of pitches, fastballs up top, changeups slower than that but with the same spin, the sliders with less spin and a little slower than the change, and three curveballs.

For another look, here is his spin set in a graph along with the rotation on his pitches:

This time the spin is the vertical axis while the rotation is the horizontal axis. We still see four clusters of pitches, but this seems to show, at least slightly better than the speed/spin chart, that Shoemaker is throwing two fastballs.

MLBAM has him throwing six different pitches, and three different fastballs if you count the cutter, and here is where he located them on average according to those automated tags (entire graph is strike zone):

For the most part, Shoemaker appears to be a glove side pitcher, only keeping his sinker on the arm side. Even his changeup drifts glove side, even though he keeps it down. In the minors, he had pretty large platoon splits, worse against lefties by over a run according to both FIP and SIERA. Shoemaker has a lot of moving parts in his delivery, accompanied with a lot of stop and go motions, but I think the actual time of release gives us a good idea why he is a glove side pitcher on average, having problems keeping his changeup away from lefties: 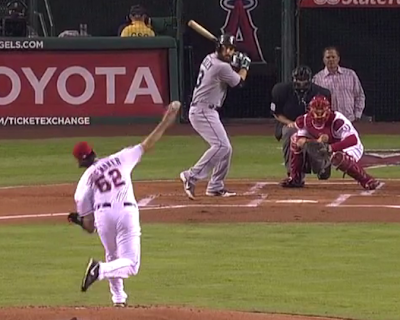 This is extremely messy, with his right leg working against his body, and his head leaning hard to the left. You can see why he would pull the ball so drastically, and this makes his low walk rates in the minors surprising.

Here is what his release points looked like according to the traditional Pitch F/X data, and there seems to be some inconsistency, particularly horizontally:

Brooks Baseball uses 55 feet as the measure of estimating release points, arguing that it is more accurate than the 50 feet measure. When you look at Shoemaker from that distance, there are less stray marks in his release points, but they still show that he was inconsistent throughout the game:

Inconsistencies aside, here is where his average release point was by the 50 feet measure, along with the average location of his pitches:

Shoemaker seems to have at least back of the rotation stuff, without a plus fastball, but with one that he can run up over 92 MPH and average about 90-91, just short of league average. He seems to have the secondary pitches and the confidence to throw them to be a starter, even if none of them are plus pitches. However, control is what I would be worried about with Shoemaker. He has to be able to repeat his delivery and keep the ball away from lefties (excluding the cutter) to be a successful starter, and I am not sure he is going to be able to do that with his delivery. His fastball doesn't appear to good enough for it to be something he can rely on a lot out of the bullpen, so I don't think he would be a reliever of any impact. To me, Shoemaker looks like a pitcher that is an "up and down guy", a guy who has value as a spot starter, filling in at the MLB when needed, but spending most of the year in the AAA rotation, though perhaps he could be a long/low leverage reliever, something that isn't needed by the Angels if they decide to keep Jerome Williams.
Posted by Unknown at 7:53 AM