Wataru Karashima is a 22 year old left-handed pitcher for the Tohoku Rakuten Golden Eagles. He doesn't turn 23 until October, and yet has thrown 121 innings for the Eagles not counting his first start of 2013 on Wednesday, where he went 5 innings, giving up 2 runs. After cups of coffee in 2009 and 2010 with the Ichi-gun team, Karashima established himself on the Eagles in 2012, when he threw 103.1 innings with a kwERA of 3.75, about 13 percent better than league average. However, he hurt his throwing elbow before the 2013 season started, delaying his Ichi-gun season debut by about four months. He proved that he was healthy in the Ni-gun with a 1.57 ERA in 23 innings before being called up, with a 3.06 kwERA.

Clearly not an imposing figure on the mound, he is listed at just 5-8 and 159 pounds. He has an old style delivery, with a high leg kick and a dramatic pause while still in the air in an effort to gain deception and upset hitters' timing. After the pause, it looks like everything else in his delivery is really fast. This may just be perspective, which you could say is the point. A dramatic pause like that speeds everything else up. Here is what his leg kick looks like from close to a plate perspective (this is from last year) 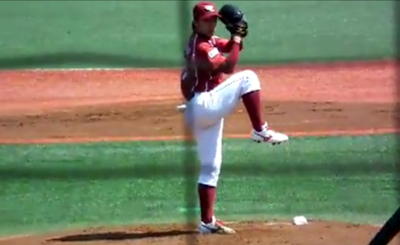 As the size might suggest, he is clearly not overpowering with the fastball, and he was not throwing very hard. Unfortunately, Yahoo did not track the velocity of his pitches very well during the game, so the following velocities come from the pitches Yahoo did track, along with the broadcast readings from the game itself.

The fastball was anywhere from 77-87 MPH, and he really liked to throw inside on lefties, not letting them get their arms extended. Against righties, he kept the ball away, so he really seemed to be an arm side fastball pitcher. He used it like a back door cutter (with what I thought was cut like movement) though Yahoo never used the cutter tag.

Karashima got down to 58 MPH on his curveball and got it to break both ways. He would get it up to 64-67 MPH, still very slow. His slider was between 68-78 MPH. He got really nice late, but non-traditional, break. It broke glove side and he located it glove side, but the movement really looked odd.

His changeup  was about 69-74 MPH. He rarely threw it, but would throw it to fellow lefties, just like he would throw the slider to fellow righties. It wasn't a pitch he commanded very well, but he missed down, not leaving it up. He threw a couple of good ones arm side to righties, between it and the cutter, he has the pitches to get them out, so I don't think platoon splits in Japan, especially because he can make up for his fastball by being deceptive and keeping it away, should be a problem.

He also threw a moving fastball at 79 MPH, but I just saw one of these tags.

He clearly built up velocity as the game went along. For example, by the 4th he was sitting 85-86 MPH on his fastball. It is still technically early in the season for him, so I would be surprised to see him throw a little harder, or at least have the harder velocity more consistently as the year goes along. Unfortunately his outing was cut short by rain.

He was athletic on the mound, moving well and playing good defense. As long as he has the timing of his long leg kick down (not necessarily a guarantee of course), I don't think there is anything in his mechanics to worry about. I think Karashima can be successful in Japan (which is easier to say since he has already been successful) consistently if he stays healthy, even with below average NPB velocity. He has pitches that work, command, and deception. However, because of the obvious traits of his fastball velocity and size, I don't think he is a MLB prospect at anytime, which works for Rakuten, as they need their young arms to continue to progress to fill the massive void that will be left when Masahiro Tanaka leaves for the MLB.
Posted by Unknown at 5:13 PM