Velocity in the NPB All Star Games

The NPB (Nippon Professional Baseball, the main baseball league in Japan) plays three all-star games, which, if nothing else, gives an extended look at some of the best players the league has to offer. Instead of scouting notes, I looked at the pitch data provided on Yahoo in order to get a look at how hard some of the pitchers throw in a relief role, along with a glimpse at the opposing hitters' bat speed.

I looked at all pitches registered at 147 KM/H, which is roughly 91 MPH, or higher in the three all-star games, about 179 pitches tracked. I labelled the pitches by which pitcher threw it, which hitter saw it, the result, and the Yahoo classification of the pitch.

Out of the pitchers that had at least one pitch 91 MPH/147 KM/H, here are their max velocity in their outing: 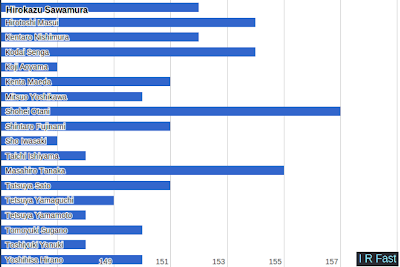 You can see why there is so much hype around Otani, as he threw the hardest pitch (over 97 MPH) in the All-Star game, and it wasn't all that close. Masahiro Tanaka of the Golden Eagles, who will probably be posted this off-season and come to the United States, had the second hardest max velocity. Kodai Senga had the most pitches 91 MPH or higher, with 27, but Otani had the 6 hardest pitches thrown in the three games.

Virtually all of the pitches were 4-seam fastballs, while Tanaka threw one pitch classified as a cutter at about 92 MPH. Tanaka also threw two pitches classified as 2-seamers at about 93 MPH, and Hirokazu Sawamura threw two 2-seamers as well at about the 91 MPH cutoff mark (one at 147 KM/H, and the other at 148 KM/H).

As far as results go, 73.2 % of the pitches were strikes, which is a really high number. However, 20.7 % of the 179 pitches were swinging strikes. 43 of the pitches (24% of pitches) were put into play, with a 15/20 groundout/flyout ratio. As far as individual hitters go, Takashi Toritani, Sho Nakata, Norihiro Nakamura, and Nobuhiro Matsuda all had three whiffs. Matsuda did have a triple, while Otani (as a hitter) and Yuya Hasegawa had doubles (Otani's coming off a 93 MPH fastball). Tsuyoshi Nishioka, the former Twin, was the unluckiest hitter in the all-star games, with 15 pitches seen 147 KM/H or above. He didn't whiff at a single one, and had a hit, along with two flyballs and a grounder. Considering his success with the above average velocity pitches, and his failure in the Majors, I think struggles with velocity is significant, especially when it comes to bat speed. This is why Yoshio Itoi's two whiffs out of six pitches seen can be problematic, especially since Andruw Jones had the same ratio, with clearly declined bat speed.

Shinnosuke Abe saw just three good velocity pitches, and put two of them in play, while the other one was a ball. Hisayoshi Chono had the same ratio, except both of them were flyballs. Matt Murton saw 9, didn't put any in play, but fouled 7 of them off. Otani saw 7 as a batter, with a whiff, but two balls in play, with three fouls.