Former Rakuten Golden Eagles pitcher Yusuke Inoue is going to try to establish a baseball career in the United States according to reports. Inoue is a 27 year old right-handed pitcher that was senryokugai'd (roughly the equivalent of non-tendered in the NPB) by Rakuten this off-season after not pitching with the Ichi-gun team (the "big league" team) in 2013.

Inoue spent 2013 in the Ni-Gun (the farm league), appearing in 21 games for Rakuten, facing 153 batters. By ERA, he was one of the worst pitchers in the Ni-Gun (8.78). He also struggled to miss bats, only striking out about 12.5 % of all batters faced, while walking over 18 percent. Since being taken out of University in the 4th round in 2008 by Rakuten, he has only pitched in 9 Ichi-Gun games, 7 in 2010 and 2 in 2012, and those games did not go well either. In 2009, he didn't pitch in any games at any level thanks to injury. So statistically, there doesn't seem to be anything attractive about Inoue to a foreign team, but what about from a general scouting perspective?

His size probably keep him as a reliever at 6-0 187 (though he may have put on a little more weight than that). He also comes from a pretty low sidearm angle, which is heightened by the fact that he gets low in his delivery. 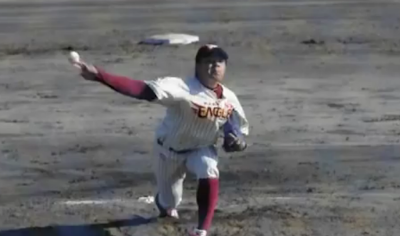 His overall delivery seems to give him some deception, with a bit of a crossfire motion with his throwing arm temporarily hiding behind his glove arm and leg. Here is a look at his delivery from the first base side in one of his bullpens (so the delivery itself seems a little slower that it usually is):

At least to me, there doesn't appear to be much special here, pretty free and easy, pause as he gets his leg up and slings it back to him. At least in this look, his arm angle looks a little bit higher.

Stuff wise, Inoue is a bit of an enigma. In 2010 in the NPB, Inoue averaged less than .1 MPH below 90 MPH, with a slider almost 82 MPH, along with a forkball and a cutter. When he returned to the Ichi-Gun in 2012, he averaged below 87 MPH, with a slider at 76.5 MPH, a cutter also a couple of MPH slower, and no forkball. He is supposed to be able to get up to 92 MPH (and had a reputation of being somewhat of a power pitcher when drafted), but with no pitch data for his 2013 season and not enough video to go on for his Ni-Gun season, we have to assume he is still averaging less than 87 MPH on his fastball.
Posted by Unknown at 3:12 PM